UN Photo/Eric Kanalstein
A member of the UN Mine Action Service (UNMAS) clears the UN base outside Juba, South Sudan, of unexploded ordnance (UXO’s) in the aftermath of heavy clashes. UXO are comprised of bombs, mortars, grenades or other devices that fail to detonate but remain volatile and can kill if touched or moved.
28 February 2019
Peace and Security

Secretary-General António Guterres issued a statement on the eve of the 20th anniversary of the Anti-Personnel Mine Ban Convention coming into force, on 1 March, 1999, saying it was a welcome milestone, but more countries needed to sign up and ratify “as soon as possible”.

The statement said that the Convention had “saved countless lives, stopped mutilation and injury and enabled the revitalization of livelihoods.”

His Spokesman added that the UN chief “commends the commitment of the States parties to rid the world of a weapon that kills and maims indiscriminately, while seriously impeding peace and development.  He added that Mr. Guterres He congratulated the 31 States who have been able to declare their land mine-free, and “urges all States that have not done so to accede as soon as possible to the Convention.”

Mines must become ‘a relic of the past’

The Convention was concluded at an international conference in September 1997 in Oslo, Norway, in September 1997, and bans the use, stockpiling, production and transfer of Anti-Personnel Mines, and calls for their total destruction. It’s also referred to as the Ottawa Convention, as it was opened for signature in the Canadian city, at the end of 1997.

It remained open at UN Headquarters in New York, until its entry into force, but in December 1997 a total of 122 Governments signed the treaty, with Burkina Faso becoming the 40th country to ratify the agreement, triggering its entry into force in 1999.

“The Secretary-General calls for accelerated efforts to render anti-personnel mines a relic of the past.  He also appeals to States to ensure access to sustainable assistance and services for the thousands of mine victims,” said the statement.

♦ Receive daily updates directly in your inbox - Subscribe here to a topic.
♦ Download the UN News app for your iOS or Android devices.
Anti-Personnel Mine Ban Treaty|landmines

20 years on from landmark Mine Ban Treaty, dangers on the rise to life and limb 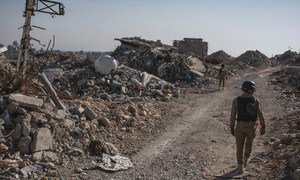 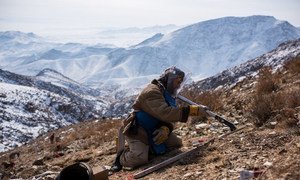