UN News/Daniel Dickinson
25-year old Kedra Abakar was abducted from his home on the the island of Ngomiron Doumou in Lake Chad by extremists from the Boko Haram terrorist group. (9 February 2019)

Noting that two years of joint UN-African Union (AU) efforts have strengthened the continent’s ability to detect and defuse crises before they escalate, Rosemary DiCarlo, Under-Secretary-General for Political and Peacebuilding Affairs, said that while “silencing the guns for good requires the participation of all”, it also means “keeping them from firing in the first place”.

Adding that resilient societies were key to the objective, she argued the need for building strong institutions, good governance and encouraging inclusive politics.

While acknowledging that the continent has, in recent years, made “great strides” in deepening democracy and democratic institutions, she pointed out that numerous challenges remained, such as the “marginalization of certain groups from political processes, the prevalence of a ‘winner-take-all’ approach, corruption, and the mismanagement of natural resources”.

Ms. DiCarlo noted that “progress has slowed” in efforts to increase women’s leadership and meaningful participation in political processes, stressing: “We must redouble our efforts in this critical pursuit”.

She maintained that in line with the 2030 Agenda for Sustainable Development and the African Union’s own Agenda 2063, the UN continues to work with the AU and the Regional Economic Communities to help build strong national institutions and address the root causes of armed conflict.

“Across the continent, entrepreneurship is up, access to education has increased and child mortality has declined”, she observed, recalling the Secretary-General’s declaration that “a wind of hope is blowing in Africa”.

African countries themselves “have a central role to play” in silencing the guns at home, but “it is vital that the international community lend its support”, she said.

Ramtane Lamamra, AU High Representative for Silencing the Guns in Africa by 2020, told the Chamber that the tremendous efforts “to make peace a viable and lasting reality across the continent” has resulted in “notable progress” in preventing, managing and resolving conflicts in Africa.

He said joint initiatives in recent months steering countries away from crisis, were responsible for “generating optimism about a Continent emerging from the shadows and moving steadily to restore peace and stability.”

However, many countries remain “trapped in a vicious cycle of violent conflict and its deadly consequences” owing to transnational crime, terrorism, and the proliferation of Small Arms and Lights Weapons”, he stated, adding that ungoverned spaces; corruption and illicit financial flows; and illegally exploiting natural resources, further exacerbated the situation.

Mr. Lamamra emphasized that to prevent and resolve conflicts in Africa, the gap between political and military efforts must be bridged and there needs to be an investment in economic and social development.

Simeon Oyono Esono Angue, Foreign Minister of Equatorial Guinea - which is chairing the Council this month – chaired the debate and said that to effectively, verifiably and transparently silence Africa’s weapons, international support, especially within the Security Council, was imperative.

But he also stressed the “vital importance” of involving African citizens themselves, who are those bearing the brunt of conflict.

It is the “collective responsibility” of all African countries to prioritize its citizens’ participation in political and economic processes to promote equity and prevent violence “at all levels” he spelled out.

As Africa must address both “the symptoms and the root causes of conflicts” he asserted that it was vital that continent’s capacity to accelerate development and reduce poverty to eliminate the space for conflict and violent extremism be strengthened.

“Our lives depend on it”, he stated.

At the onset of the meeting, the Council passed a new resolution expressing concern that while the continent faces a challenging security environment, to create an Africa without conflict, it is essentially the responsibility of the AU, its member states and their people and institutions. It also takes note of AU efforts to counter transnational terrorism and, with sub-regional organizations, to conduct peace support operations. 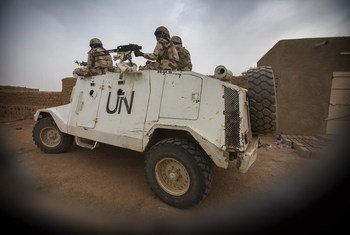 The United Nations Secretary-General António Guterres and the UN Security Council condemned on Saturday in the strongest terms the attack against vehicles of the peacekeeping mission in Mali (MINUSMA), which took place on Friday and in which three "blue helmets" from Guinea were killed and at least another injured. 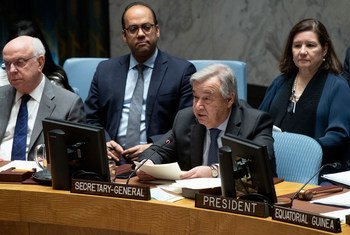 With mercenaries undermining global peace and security and weakening States’ capacities to protect their people, the UN Security Council on Monday shone its spotlight on their activities as a source of destabilization in Africa.