UN Photo/Eskinder Debebe
A wide view of the Security Council chamber as it meets on the situation in the Bolivarian Republic of Venezuela.

She said that the “grim reality” facing the country, according to available information, showed a deteriorating economy, with citizens dying of preventable causes, and 3.4 million Venezuelans so far, choosing to leave, due to conditions at home.

Exactly a month ago, I briefed the Security Council on the protracted crisis in Venezuela...Since then, we have witnessed an alarming escalation of tensions - UN political and peacebuilding affairs chief, Rosemary DiCarlo

Civil society groups have reported that infant mortality has increased by over 50 per cent since 2017, as have the number of infant deaths, she said, adding that data from the Pan American Health Organization (PAHO) indicate that 80 per cent of hospitals lack sufficient medicines, while up to 40 per cent of the medical personnel have left the country.

The UN now has a coordinated effort underway to deliver assistance closest to those Venezuelans in need, focused on nutrition, health and protection, under the principles of humanity, neutrality, impartiality and independence said Ms. DiCarlo, which should be free “from political objectives and delivered on the basis of need.”

UN Photo/Eskinder Debebe
Rosemary DiCarlo, Under-Secretary-General for Political and Peacebuilding Affairs, briefs the Security Council on the situation in Venezuela.

Ms. DiCarlo noted that supplies sent by Russia and China have entered the country, in coordination with the Venezuelan Government, to be “distributed to those in need.” However, food and medical supplies stockpiled by the United States and other countries at the Colombian and Brazilian borders, have been blocked from entering the country by Venezuelan authorities.

The UN has confirmed that, amid the violence that erupted over last weekend as a result of the aid blockade, four people were shot, and 64 injured near the Brazilian border, most of them by gunfire. The UN’s head of Political and Peacebuilding Affairs also quoted figures from Colombian migration authorities, claiming that 285 individuals were injured. The UN Human Rights Office (OHCHR) has received reports, said Ms. DiCarlo, that point to the involvement of pro-government armed elements in the violent attacks on protestors.

Speaking on behalf of the United States Government, Elliot Abrams, the U.S. Special Representative for Venezuela, called on the members of the Security Council to meet the growing needs of Venezuela and the region, to contribute to Venezuelan democracy and “pressure the illegitimate regime to peacefully step down.” He also questioned the value of dialogue with President Nicolás Maduro who, he said, would “rather block and burn donated medicine and bread than see it in the hands of Venezuelan children.”

The Permanent Representative for Russia, Vassily Nebenzia, described the attempt to get US aid into Venezuela as “an attempted illegal state border crossing for the delivery of unknown cargo,” adding that an illegitimate attempt had been made to transfer “unverified” supplies, that was not requested by Venezuela. Mr. Nebenzia said that if the US genuinely wanted to help the Venezuelan people, they would have operated through UN agencies. He added that Russian has successfully delivered 7.5 tonnes of medical goods through the World Health Organization (WHO), without any obstacles.

François Delattre, France’s UN Ambassador, said that Venezuela was going through the worst humanitarian crisis in its history, with a civilian population – particularly women and children – being intentionally targeted. The “Maduro regime”, he said, had decided to deprive its population of international aid, and has not hesitated to kill and to wound hundreds of its own unarmed citizens, during clashes.

Mr. Delattre said that, by blocking international aid, Venezuela has brought upon itself the opprobrium of the international community, and its own people.

Speaking in the Security Council chamber on behalf of Venezuela, Foreign Affairs Minister Jorge Arreaza, said Ms. DiCarlo’s briefing to the Council “was biased” and disseminated information “from one source” only. He said the US had been attempting to mount “a coup” against his country.

Referring to the attempts to move US and opposition-backed aid shipments across the border with Colombia into Venezuela, Mr. Arreaza said: “That was the last chapter of the coup on Saturday, and I can tell you, read my lips, it failed.”

“Now is the time for us to return to sanity and to respect international law”, he said adding that the Government was prepared to sit down and negotiate with the opposition, led by Juan Guaidó: “Among Venezuelans, we can build our own solution without intervention, interference from anyone, much less the United States,” he said. 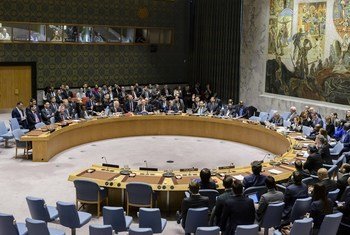 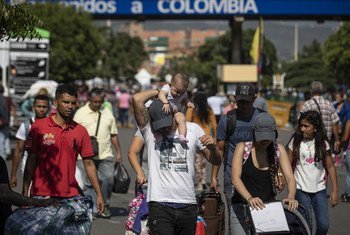