In an address to the Conference on Disarmament in Geneva, António Guterres highlighted several threats to world security, from chemical weapons to lethal autonomous weapons and hypersonic missiles.

His comments – which called for action to “alleviate tensions and take us back from the nuclear brink” - come ahead of a second planned summit later this week between US President Donald Trump and the leader of North Korea, known officially as the Democratic People’s Republic of Korea (DPRK), Kim Jong-un.

“I will be blunt. Key components of the international arms control architecture are collapsing. We need a new vision for arms control in the complex int'l security environment of today.” – UN Secretary-General @antonioguterres warns Conference on Disarmament of worrying trends. pic.twitter.com/GmoPztqmao

“Key components of the international arms control architecture are collapsing,” the UN chief said. “The continued use of chemical weapons with impunity is driving new proliferation. Thousands of civilian lives continue to be lost, because of illicit small arms and the use in urban areas of explosive weapons designed for open battlefields.”

In addition, new weapon technologies were intensifying risks “in ways we do not yet understand and cannot even imagine”, the UN Secretary-General added.

The past 70 years have seen major successes in disarmament initiatives, he insisted, noting that the most successful ones were those that were led by the “major powers”.

But these gains are in “increasing jeopardy” amid a new arms race rendered “particularly dangerous” because of renewed uncertainty over nuclear weapons, Mr. Guterres said.

Highlighting the dangers of allowing the 1988 Intermediate-Range Nuclear Forces (INF) Treaty between Russia and the US and Russia to lapse, the UN chief warned that European States would be among the first where any insecurity “will be keenly felt”.

Efforts must also be made to extend the “New START” arms reduction treaty between the US and Russia before it expires in 2021, he continued, since it was “the only international legal instrument limiting the size of the world’s two largest nuclear arsenals”.

Its inspection provisions represented important confidence-building measures that have benefited everyone, Mr. Guterres said, noting that “in the absence of trust, governments had sought “the strictest verification measures”.

Such arms control procedures have been “one of the hallmarks” of international security for 50 years, he continued, adding that the joint Russia-US effort had resulted in global stockpiles of nuclear weapons decreasing to only one-sixth of what they were in 1985.

Today, however, “that legacy is in grave danger”, the UN Secretary-General said, before reminding the forum that only last year, he launched his Disarmament Agenda - “Securing Our Common Future” – with 40 specific commitments to support disarmament.

His Agenda was a guide for action he noted, but also created to support Member States who have a “responsibility” to develop transparency and confidence-building tools that would help to “alleviate tensions and take us back from the nuclear brink”.

Such steps should take into account regional nuclear challenges, the Secretary-General maintained, as well as technological developments including cyber security, artificial intelligence and the next generation of hypersonic weapons that could be used to launch attacks at unprecedented speed.

UN Photo/Antoine Tardy
The UN Conference on Disarmament body, during the opening day of it's High-Level Segment, 25 February, 2019.

This had resulted in arms control negotiations increasingly taking place elsewhere, including the UN General Assembly, or outside the United Nations framework, Mr. Guterres said.

“The history of this chamber is a cautionary tale,” he explained. “The failure of the Council of the League of Nations to grapple with the most pressing security challenges of its day was an important factor in its slide into irrelevance.” 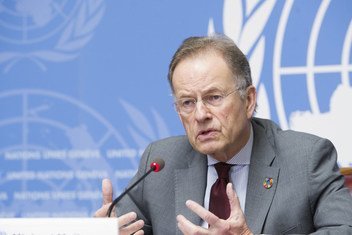 Michael Møller, head of the UN in Geneva, has warned delegates to the Conference on Disarmament that cyber-security challenges, and the existence of new weapons systems and technologies, are not being sufficiently addressed or reflected in current arms control regimes. 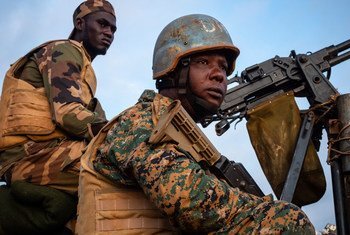