“The signing of the Global Agreement for Peace and National Reconciliation on 6 February is the culmination of a long process,” said Parfait Onanga-Anyanga, the Secretary-General’s Special Representative and Head of the UN mission in CAR.

In his final briefing to the Council, Mr. Onanga-Anyanga recalled that after a difficult transition, new legitimate and democratic institutions were installed on March 30, 2016. “Central Africans have come a long way, and despite numerous challenges…they deserve our admiration and encouragement,” he added.

Since conflict began in CAR in 2012, due to fighting between the mostly Christian anti-Balaka militia and the mainly Muslim Séléka rebel coalition, thousands of civilians have been killed and two out of three people in the small Central African Nation have become dependent on humanitarian aid.

“While we are right to welcome the fact that our multifaceted efforts have allowed this important political advance in the Central African Republic, we must remain vigilant because the situation remains serious,” said the UN envoy, adding: “The unbearable fate of displaced people and refugees, as well as scenes of senseless violence and the many victims [are a nagging reminder] of this.”

Mr. Onanga-Anyanga stressed that the signing of the peace deal was a “necessary and decisive step, certainly, but only one step. The hardest thing is indeed to come. The real test will be in the full and good faith implementation of the agreement,” he explained.

With that in mind, he called on all stakeholders to scrupulously honor the commitments they have made under the agreement and not to betray the confidence placed in them by the Central African people and all those who accompanied them in throughout the peace process.

“The country today has the opportunity to open a new page full of promise and that turns its back, definitely, to a painful story,” said Mr. Onanga-Anyanga, and he urged the parties to always pursue dialogue to sustain the new political and social consensus put forward by the February 6 agreement.

The UN envoy said the role of the guarantors, especially neighboring countries and the region, and that of the facilitators will be decisive for the full realization of the accord. He welcomed the joint initiative of the United Nations and the African Union to hold a meeting of the International Support Group at CAR on Friday 22 February.

Mr. Onanga-Anyanga said that the support of the Security Council, the countries of the region and the wider international community remain essential for the successful implementation of the peace agreement.

Finally, he saluted the sacrifice of peacekeepers who were killed in CAR. "These peacekeepers gave their lives to help assist, protect and comfort the Central African people and support the country's young democratic institutions when threatened," he said.

This was Mr. Onanga-Anyanga's last briefing to the Security  Council as Special Representative for CAR. Heading up the UN Multidimensional Integrated Stabilization Mission in the Central African Republic (MINUSCA) since August 2015, Mr. Onanga-Anyanga will be succeeded by Mankeur Ndiaye, of Senegal. 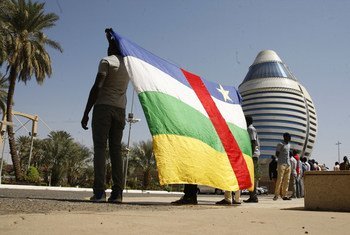