Concerned that one language goes extinct every two weeks, the United Nations is honouring linguistic diversity and celebrating indigenous languages on International Mother Language Day. And the roots of the Day start in a South-Asian country with a bloody and historic connection to 21 February.

“We have to protect our heritage, our culture, our existence,” said Ambassador Masud Bin Momen, of Bangladesh, the country which successfully lobbied the UN Educational, Scientific and Cultural Organization (UNESCO) in 1999 to create International Mother Language Day. The UN General Assembly formally recognized the Day in 2008.

The origins of the Day began before 21 February 1952, but erupted on that day, when students at the University of Dhaka and other activists protested a Government order declaring Urdu as the sole national language. Bangladesh at the time was part of Pakistan. The deadly protest provoked widespread unrest, resulting in 1956, in Bengali being granted official status.

“It is a part of our Bengali nationalism to promote and commemorate this Day for the protection of not only our language but all those struggles elsewhere around the world,” Mr. Momen told UN News.

He said International Mother Language Day also celebrates multilingualism worldwide, promoting more tolerance and a “sense of culture of peace and harmony where diversity does not mean harmful for the global citizen but diversity is also a powerful instrument.”

Watch the entire television interview with Mr. Momen on YouTube, or listen to our highlights on SoundCloud.

As part of the Day’s celebrations, the United Nations Postal Administration will issue 18 World Language stamps, each saying “hello” in English and in a dozen other languages.

A special event will be organized on 21 February in New York, organized by Bangladesh, Guatemala, Mozambique, Nigeria and Papua New Guinea, in collaboration with the United Nations Department for General Assembly and Conference Management (DGACM), the UN Department of Global Communications (DGC), the UN Postal Administration (UNPA) and the New York Office of the UN Educational, Scientific and Cultural Organization (UNESCO).

♦ Receive daily updates directly in your inbox - Subscribe here to a topic.
♦ Download the UN News app for your iOS or Android devices.
Culture and Education 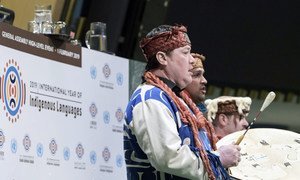 Hundreds of ancestral languages have gone silent in recent generations, taking with them the culture, knowledge and traditions of the people who spoke them. To preserve and revitalize those that remain, the United Nations on Friday officially launched the International Year of Indigenous Languages, at UN Headquarters in New York.