© UNICEF/UN0234655/Modola
Families wait in the early hours of the morning to be registered prior to a food distribution carried out by the United Nations World Food Programme (WFP) and partner agencies, in Thonyor, Leer county, South Sudan.
20 February 2019
Human Rights

United Nations investigators on Wednesday denounced a raft of gross human rights violations being perpetrated in South Sudan, where over the past year, incidents of rape have surged and abductions, sexual slavery and brutal killings “have become commonplace.”

“There is a confirmed pattern of how combatants attack villages, plunder homes, take women as sexual slaves and then set homes alight – often with people in them,” Yasmin Sooka, Chair of the Commission on Human Rights in South Sudan said in Nairobi at the launch of the launch of the three-member expert-body’s third report.

“Rapes, gang rapes, sexual mutilation, abductions and sexual slavery, as well as killings, have become commonplace in South Sudan,” she continued. “There is no doubt that these crimes are persistent because impunity is so entrenched that every kind of norm is broken.”

While a lack of accountability during the country’s struggle for independence has helped to fuel the current conflict, the report stresses that sustainable peace requires tangible and credible accountability and justice.

“We do acknowledge the efforts of the Government to hold some perpetrators accountable for gross violations of human rights and serious violations of international humanitarian law,” Commissioner Andrew Clapham said in Geneva.

“However, we also have to note that pervasive impunity remains the norm.”

The Commission, set up in 2016 by the UN Human Rights Council, urged the Government, the region and the international community to “take urgent steps” to respect the cessation of hostilities, implement the Revitalized Agreement signed five months ago and “push to silence the guns completely.”

South Sudan, the world’s youngest nation, has been mired in instability and conflict for nearly all seven years of its existence.

Earlier in 2018, President Salva Kiir and his former Vice-President and long-time political rival, Riek Machar, signed a new peace accord, and hopes have been high that the deal would finally end the crisis and deliver better and safer conditions for millions that have been left homeless and hungry.

Since its December 2017 update, the Commission said the magnitude of rape and sexual violence has worsened markedly, with a surge in rapes between November and December.

According to UNICEF, 25 per cent of those targeted by sexual violence are children, including girls as young as seven. Elderly and pregnant women have also been raped, and sexual violence against men and boys remains underreported as the stigma attached to it is higher than that of raping and killing the young and the elderly. 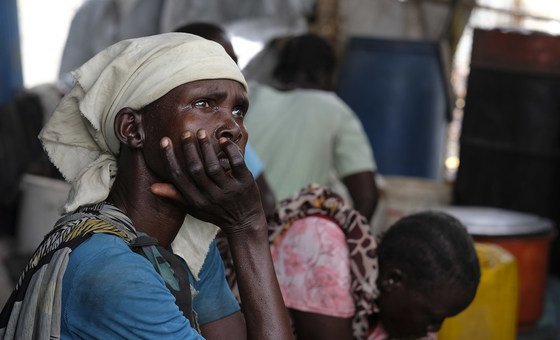 Portrait of a woman resident of Wau Shilluk, South Sudan. The town has been reduced to dust, as ongoing conflict has seen the complete destruction of homes, the school and hospital., by © UNICEF/UN0236862/Rich

Cases in 2018, which involved 18 alleged perpetrators of the UN Mission in South Sudan (UNMISS), were registered in the UN Sexual Exploitation and Abuse Database, and peacekeepers from one of the Protection of Civilians sites were repatriated.

The Commission also noted a link between the conflict and the country’s political economy – pointing to the misappropriation of natural resources, and “a total lack of transparency and independent oversight,” that has allegedly diverted revenues to Government elites.

Victims and vulnerable communities – especially women, the internally displaced and refugees – must be included in designing and implementing mechanisms for the transitional justice agenda, which the Commission deemed “essential for building sustainable peace.”

As it continues to document violations, build dossiers on perpetrators, and collect and preserve evidence for future accountability processes, the Commission has detailed three case studies documenting war crimes, which will be handed over to the Right Commission in Geneva.

“This evidence may be used beyond South Sudanese bodies – it may be available on request to regional and state parties for future prosecutions,” said Commissioner Barney Afako.

“With sustained political will and effective leadership,” concluded Ms. Sooka, “the transitional justice framework and mechanisms can help to bring accountability, reconciliation and healing as South Sudanese deal with the past and secure their future stability and prosperity.”

A surge in sexual violence in South Sudan’s Unity state targeting victims as young as eight years old, has prompted a call from the UN human rights office, OHCHR, for urgent Government measures to protect victims, and bring perpetrators to justice.