Members of the United Nations Security Council are on a mission to West Africa where they are reviewing strides made in peacebuilding by both Côte d'Ivoire and Guinea-Bissau.

The Council also participated in a roundtable on the transition from peacekeeping to peacebuilding with United Nations Resident Coordinators in Côte d'Ivoire and neighbouring Liberia.

Côte d'Ivoire has been a non-permanent member of the UN Security Council since the beginning of 2018. The UN Operation in Côte d'Ivoire (UNOCI) closed in June 2017, after 13 years deployed in the country which was plunged into instability from 1999 to 2011. The end of UNOCI's mandate was hailed as a UN peacekeeping success.

At a press conference on Friday, the Representative of Côte d'Ivoire to the UN and co-lead of the Council mission, Leon Kacou Adom, said the visit had provided an opportunity to exchange experiences and information, including on best practices on transitions from peacekeeping to peacebuilding, among representatives of Member States, Ivorian authorities and experts from UN country teams in Côte d'Ivoire and Liberia.

“At a time when United Nations peacekeeping operations are at a crossroads, and in a context marked by the reform launched by Secretary-General António Guterres, it is clear that the Security Council, which is in charge of peacekeeping and international security, should highlight successful experiences in this regard, in this case in Côte d'Ivoire and Liberia,” he stressed.

The Council delegation flew Friday afternoon to Guinea Bissau, kicking of the second leg of its visit to West Africa. The purpose of this visit was to monitor and evaluate the crisis resolution process in this country.

Legislative elections are scheduled for March 10, 2019 in Guinea Bissau. They are to be followed by a presidential election whose date has not been set.

During the visit, the delegation met with Prime Minister Aristides Gomes, UN Deputy Special Representative David McLachlan-Karr, as well as representatives of partner organizations involved in the peacebuilding process in Guinea Bissau, according to a Twitter post by the UN Department of Political Affairs and Peacebuilding.

After more meetings in Guinea-Bissau, the Council delegation will head back to New York later on Sunday 17 February. 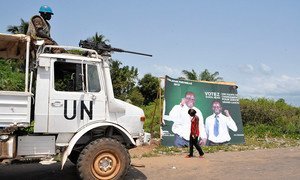