UNESCO
The 8th edition of World Radio Day marks a time where people around the world celebrate radio and how it shapes our lives.
13 February 2019
UN Affairs

“Even in today’s world of digital communications, radio reaches more people than any other media platform” explained the UN chief, adding that it “conveys vital information and raises awareness on important issues”.

“And it is a personal, interactive platform where people can air their views, concerns, and grievances” he added, noting that radio “can create a community”.

UN Radio was established on 13 February 1946, and since 2013, the day has been commemorated to recognize radio as a powerful communication tool and a low-cost medium.

“For the United Nations, especially our peacekeeping operations, radio is a vital way of informing, reuniting and empowering people affected by war”, said Mr. Guterres.

UNESCO
Radio brings together people and communities from all backgrounds to foster positive dialogue for change.

Despite the rise of the internet, many parts of the world, especially remote and vulnerable communities, have no access, making radio broadcasting via transmitters, a vital lifeline. Joining a community of local listeners, also provides a platform for public discussion, irrespective of education levels.

Moreover, it has a strong and specific role in emergency communication and disaster relief.

“On this World Radio Day, let us recognize the power of radio to promote dialogue, tolerance and peace”, concluded the Secretary-General.

Since its invention as the first wireless communication medium well over a hundred years ago, “radio has sparked new conversations and broadcast new ideas into people’s homes, villages, universities, hospitals and workplaces,” she continued. “To this day, dialogue across the airwaves can offer an antidote to the negativity that sometimes seem to predominate online, which is why UNESCO works across the world to improve the plurality and diversity of radio stations”.

The UNESCO chief pointed out that radio has adapted to 21st century changes and offers new ways to participate in conversations that matter, retaining its role as “one of the most reactive, engaging media there is”, especially for the most disadvantaged.

For example, she flagged that rural women constitute one of the most under-represented groups in the media and are twice as likely as men to be illiterate, “so radio can be a critical lifeline to express themselves and access information”.

Ms. Azoulay made clear that “UNESCO provides support to radio stations in sub-Saharan Africa that enable women to participate in public debate, including on often-neglected issues such as forced marriage, girls’ education or childcare”.

Linguistic diversity, and people’s right to express themselves on-air in their own languages, is also crucial – especially true in 2019 which has been designated by the International Year of Indigenous Languages by the UN.“In former conflict zones, radio can dispel fear and present the human face of former foes”, she elaborated, citing North-West Colombia where community radios are healing old wounds “by highlighting the good deeds of demobilized combatants, such as clearing polluted waterways”.

“The challenges we face – whether they be climate change, conflict or the rise in divisive views – increasingly depend on our ability to speak to each other and find common solutions”, she concluded.

♦ Receive daily updates directly in your inbox - Subscribe here to a topic.
♦ Download the UN News app for your iOS or Android devices.
World Radio Day

Celebrating the diversity of radio, the medium people use the most 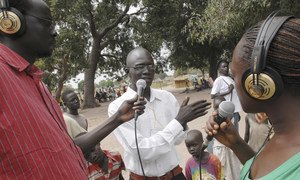 In an era of dramatic advances in communications, radio retains its power to entertain, educate, inform and inspire, United Nations Secretary-General António Guterres said, marking World Radio Day with a call to celebrate both radio and sports as ways of helping people achieve their potential.