© UNICEF/UN0253234/Moreno Gonza
José David Dominguez, 9 years old, is accompanied by his mother, Yenni Dominguez, to get his vaccine at UNICEF's health point in Ipiales, Colombia. UNICEF has launched a regional response effort to support Venezuelan children and families, as well as children in host communities.
8 February 2019
Humanitarian Aid

The situation for ordinary Venezuelans is increasingly critical but the United Nations remains committed to providing humanitarian support, based on “need, and need alone”, said a  senior aid official on Friday.

Speaking to journalists in Geneva, the UN’s aid coordinating branch, OCHA, underlined that it was observing developments at Venezuela’s border with Colombia, where an aid convoy arrived on Thursday.

#Venezuela: “The ideal scenario is that humanitarian aid is provided independent, independent of any political or other considerations than the pure humanitarian, and that is based on need and need alone,” told @JensLaerke @UNOCHA spox to the press in Geneva today. pic.twitter.com/cXUQPKZSyd

“On the situation at the border, the UN is monitoring that situation closely,” said Jens Laerke from the Office for the Coordination of Humanitarian Affairs (OCHA). “The ideal scenario is that humanitarian aid is provided, independent of any political or other considerations than the pure humanitarian, and that is based on need and need alone.”

‘People were coming, starving’ to Colombia

At the border, the World Food Programme (WFP) confirmed that needs are at “crisis”-like levels inside Venezuela, where opposition politician Juan Guaido declared himself interim President last month, amid deepening economic and political uncertainty.

“How can we know if people are starving or not? Just stay at the border with Colombia, and look who is coming into Colombia,” said WFP senior spokesperson Hervé Verhoosel. He said 1.2 million people had come, “starving, in Colombia with no money, no food, no medicine…Yes of course there’s a crisis in the country.”

WFP has been providing emergency food assistance at the Colombian border since early 2018.

Venezuelan migrants, Colombian returnees and host communities have been assisted, Mr Verhoosel explained, adding that the flow of migrants into Colombia is expected to rise.

In a bid to help 3.6m Venezuelans including two million children, OCHA has appealed for nearly $110 million.

Help for local institutions in Venezuela

The UN has already helped local institutions by providing medical kits for women and children, and aid teams are also delivering 100,000 treatments for severe acute malnutrition. Six temporary shelters have also been set up in the western border states to house 1,600 people and offer them protection and information, as well as family kits containing food and clothing.

“Since November, UN agencies have been scaling up existing activities inside Venezuela to meet urgent health, nutrition and protection needs,” Mr Laerke said. “This highly prioritized plan requires $109.5 million. Up to now we only $49.1 million received against that plan.”

In 2018, around 50 tons of medicines and supplies were delivered to Venezuela by PAHO, WHO spokesperson Tarik Jasarevic said.

This led to the re-launch of the vaccination campaign in August 2018, with coverage rate reaching 95 per cent of children aged up to 15. Reported cases of measles appear to be declining, Mr Jasarevic explained.

Immunization campaigns have also been launched to successfully halt a diphtheria outbreak which began in July 2016 and has claimed 270 lives to date.

Although reported diphtheria cases have been declining among children under 15 years of age, transmission among adults persists, WHO warned.

In addition to food and medical shortages inside the oil-rich country, the Inter-Parliamentary Union (IPU) noted that dozens of opposition politicians continue to face ongoing harassment there.

“The most information that we have is on the situation of the speaker of the National Assembly Mr Guaido,” said Rogier Huizenga, Human Rights Manager and Secretary of the Inter-Parliamentary Union (IPU) Committee on the Human Rights of Parliamentarians.

“We also know for instance that Ms. Delsa Solorzano, also a prominent member of opposition in Parliament in Venezuela, has been accused of having been involved in some kind of incitement to violence,” he added, “through what appears to be a doctored WhatsApp exchange. So she is accused as a result of that, she had to go into hiding for a couple of days.”

The IPU official explained that its human rights panel had looked at cases of 60 opposition Members of Parliament in Venezuela who are facing “different kinds of intimidation”.

More than 40 MPs had faced physical attacks and six had fled abroad, he said, noting also that the former Deputy Speaker of the National Assembly was still sheltering in the Chilean embassy in the Venezuelan capital, Caracas. 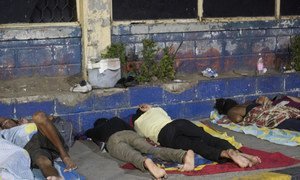 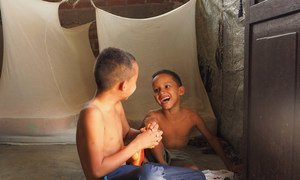