OCHA/P. Peron
Residents of the Muslim Ward known as Aung Mingalar in the town of Sittwe, Rakhine State, Myanmar.

A newly formed parliamentary committee to amend Myanmar’s problematic constitution was welcomed as a positive move on Thursday by Yanghee Lee, United Nations Special Rapporteur on the situation of human rights in the country.

"The establishment of this committee is a positive development that I hope will aid Myanmar to truly transition to democracy," she said.

Noting that there was popular support for constitutional reform, Ms. Yanghee Lee encouraged the new joint committee to deliver accordingly. The ruling National League for Democracy party, led by Aung San Suu Kyi, pledged to amend the constitution during its 2015 national election campaign, which it won by a landslide.

The previous military government had drafted the 2008 constitution, which has been a stumbling block to a full democratic transition, as it reserves 25 per cent of parliamentary seats for the military, as well as designating military control of the Ministries of Home Affairs, Defense Services and Border Affairs.

"It was deeply upsetting to meet families who have only known statelessness and persecution."Angelina Jolie meets Rohingya refugees who fled persecution and death in Myanmar. Families told the UNHCR Special Envoy that they'd been "treated like cattle" their whole lives. pic.twitter.com/4HaOlWDvwz

"The current constitution is not democratic, and Myanmar cannot be considered a democracy without it being amended”, underscored the Special Rapporteur.

The world must not turn away Rohingya refugees

Much of the international focus on Myanmar has stemmed from the flight of hundreds of thousands of mostly-Muslim Rohingya refugees across the northern border into Bangladesh since late August 2017, following a Government-sanctioned military-led campaign of brutal killings, sexual violence and multiple human rights abuses against the minority group, based in Rakhine state.

Visiting Bangladesh this week, Angelina Jolie, the UN Refugee Agency’s (UNHCR) Special Envoy, underscored that the world must not turn away from the nearly one million Rohingya refugees who have fled Myanmar.

The Special Envoy expressed UNHCR’s gratitude to the Bangladeshi people and Government for receiving over 700,000 refugees since August 2017, saying: “I pray that generosity and that support continues for these wonderful families.

She also raised concerns that without an urgent expansion and strengthening of educational opportunities, a generation of Rohingya children would be at risk.

Ms. Jolie began her three-day visit on Monday in Chakmarkul and Kutupalong refugee camps, where she heard testimonies from Rohingya women, children and men who have endured a lifetime of persecution and discrimination. There she witnessed some of the remarkable humanitarian response efforts to date, including a joint Government-UNHCR led registration process providing refugees, for the first time, with a legal identity.

She also visited a transit centre for newly arrived refugees and a hospital giving much-needed care and support to women and girls.

On Tuesday at a press conference in Kutupalong, the world’s largest and most densely populated refugee settlement, she said that until the Rohingya refugees can voluntarily return home to Myanmar, we have a collective responsibility to ensure that they can continue to live dignified lives in Bangladesh.

The Special Envoy’s visit came just ahead of a new funding appeal, the 2019 Joint Response Plan, to be launched next week by UNHCR, along with other humanitarian agencies. It seeks to raise more than $920 million to assist Rohingya refugees and affected local communities this year. 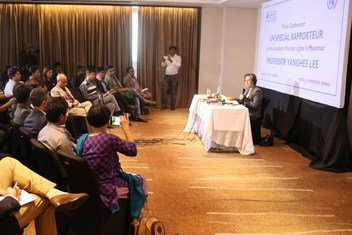 The human rights situation in Myanmar continues to deteriorate, as the civilian government fails to bring about democratic reforms and instead resorts to the kind of repression carried out under previous military regimes, said the UN human rights expert Yanghee Lee, speaking at the end of an 11-day mission to neighbouring Thailand and Bangladesh.