According to a statement from the Office of the UN Special Envoy, Martin Griffiths, representatives from the Government of Yemen and the Houthi opposition, Ansar Allah, will attend at a meeting in Amman, Jordan, on Tuesday.

A prisoner exchange agreement was signed in Sweden last December and represents the first accord between the two parties since the downward spiraling conflict began in Yemen nearly four years ago – sparking the world’s worst humanitarian crisis.

The UN Special Envoy’s office describes this round of meetings as “technical”, adding that those present will discuss steps to finalize the lists of prisoners to be released, “to advance the implementation of the [Stockholm] agreement”.

The development follows a meeting on Sunday between the UN Mission to support the HudaydahAgreement (UNMHA), and Yemen’s belligerents in the embattled Red Sea port of Hudaydah.

A statement by the mission noted that the head of the taskforce, retired Dutch General Patrick Cammaert, underlined the importance of the ceasefire agreement, which came into effect on 18 December.

The General also warned the parties about the fragility of the ceasefire and urged them to instruct their commanders on the ground “to refrain from any further violations that would jeopardize … the broader peace process for Yemen”.

In what are described as “cordial and constructive” talks, both the Yemeni Government and Houthi delegations also reiterated their “commitment” to open up the Hudaydah to Sana’a road to allow humanitarian access to the Red Sea Mills.

Meanwhile, the Security Council stressed the “vital importance” of making progress towards a political agreement to end the conflict and “relieve the humanitarian suffering of the Yemeni people”.

“Military escalation and hostilities could damage trust between the parties and risk undermining the prospects for peace”, they argued.

The Council recalled its request that the Secretary-General report on any non-compliance and called on all parties to exercise restraint, de-escalate tensions, honour the Stockholm Agreement and move forward “with swift implementation”.

UN Security Council re-endorsed the 2018 agreements between the Yemen Government and the Houthis on:

Welcoming the release of both parties’ prisoners, the Council called on each side to work “urgently” with the UN Chair of the Redeployment Coordination Committee (RCC), and the UNMHA to implement “without further delays” the agreed-upon plan to mutually redeploy forces from Hudaydah city and the ports of Hudaydah, Salif and Ras Issa.

They also called on the parties, particularly the Houthis controlling the ports, to ensure the security and safety of UNMHA personnel and unhindered movement of personnel, equipment, provisions and supplies into and within the country.

Progress must be made towards “a comprehensive political settlement to the conflict” with the full participation of women and youth, they stressed.

They reiterated their “grave concern at the continued deterioration of the humanitarian situation” and called for the rapid, safe flow of supplies and personnel into and across the country.

Reaffirming their “full support” of the RCC Chair and Special Envoy, the Council called on all parties to engage with them, asking Mr. Griffiths to “keep them closely informed of developments so that they may consider further action as necessary in support of a political settlement”.

♦ Receive daily updates directly in your inbox - Subscribe here to a topic.
♦ Download the UN News app for your iOS or Android devices.
Yemen|Hudaydah|security council 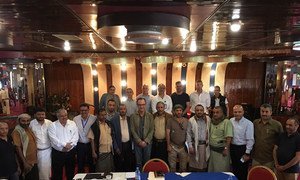 The UN Special Envoy for Yemen said on Thursday that the main negotiators for the warring sides were continuing to show the “necessary flexibility and good faith” to move forward, despite delays in implementing the agreement marking the first steps towards a lasting peace deal, brokered in Sweden last December.