© UNICEF/UN0277723/Souleiman
On 26 January 2019, in the Syrian Arab Republic, children and families are huddled together, after being forced to flee their homes, before embarking on the long and arduous journey to safety at Al-Hol camp.
1 February 2019
Humanitarian Aid

Harrowing details continue to emerge of thousands of families who have risked their lives fleeing fighting in Syria’s last ISIL terrorist-held enclave, as UN humanitarians warned on Friday that children are still dying on their way to an overcrowded camp for the displaced, amid access problems and perishing cold.

“Since fighting escalated in Hajin in early December, more than 23,000 people have fled to Al Hol (camp), effectively tripling its population,” he said. “Many more are expected.”

They travel at night with barely any belongings, often having to wade through the minefields and open fighting - Andrej Mahecic, UNHCR

Those fleeing Hajin described fierce fighting and said they were blocked from leaving by ISIL, or Da’esh extremists, who used to control large swathes of northern Iraq and Syria.

“Families fleeing the Hajin enclave and surrounding areas have also told us of a harrowing journey to safety,” Mr Mahecic explained. “They travel at night with barely any belongings, often having to wade through the minefields and open fighting.”

On reaching positions controlled by US-backed Syrian Democratic Forces (SDF), the “hungry and cold” civilians – mainly women and children, according to UNHCR - “describe being herded into open trucks” and transported northwards to Al Hol camp.

Little or no assistance is given to them, Mr Mahecic noted, adding that since early December, “we have recorded 29 deaths among children and newborns”.

More than two weeks ago, humanitarians asked the SDF to designate a site en route for Al Hol, where emergency assistance can be provided. This has yet to happen, the agency confirmed.

“We have approached the authorities who are effectively in control of the area where we need to work”, Mr Mahecic said. “We have also appealed to those fighting and those with influence over those involved in the fighting to do their utmost to grant safety for the civilians fleeing and to allow humanitarian access in the areas where we need.”

Many sleep in the open in freezing cold weather and walk or travel in open trucks from there - Christian Lindmeier, WHO

Christian Lindmeier, spokesperson for the World Health Organization (WHO) described the life-threatening delays imposed on vulnerable families: “Fleeing civilians are stopped at Al Omar oilfields for days for screening and we need access to this area to assist the people there,” he said. “Many sleep in the open in freezing cold weather and walk or travel in open trucks from there.”

Amid a surge in arrivals to Al Hol camp and overcrowding, UNHCR and its partners have set up 24-hour response teams to identify the most vulnerable arrivals and provide assistance, especially to unaccompanied or separated children.

A number of other emergency measures have been put in place, with additional large tents to provide immediate shelter for new arrivals. The camp already has more than 4,500 tents, with another 3,600 ready to be erected.

The majority of those fleeing the fighting are Syrian residents of villages in south Deir-ez-Zor province, who have been caught up in the fighting as ISIS retreated south. Mr. Mahecic noted that they are anxious about their confinement to Al Hol camp and the confiscation of their documents.

“Most hope to be allowed to join their relatives and friends in Deir-ez-Zor province and return to their homes as soon as the fighting is over,” he said.

'Much more help is required' WHO

WHO, which is ramping up its response to Al Hol camp, has already delivered thousands of medical treatments to support two mobile clinics and four health teams there.

“A week ago, WHO airlifted more than 28 tonnes of medical supplies, equipment and vaccines to Al Hassakeh Governorate to respond to growing health needs in north-east Syria,” WHO’s Mr Lindmeier confirmed.

“This was the second shipment the organization has airlifted to Al Hassakeh this month,” he added. “It’s also worth mentioning that the first shipment this year was airlifted to the governorate on 8 January. It contained 20 tonnes of medical supplies sufficient to cover 110,000 medical treatments.”

Despite the airlifts, much more help is required. “Access does remain the key issue, just to remind everyone, and we need guaranteed approvals to access the camp and the roads leading to it,” Mr Lindmeier explained.

♦ Receive daily updates directly in your inbox - Subscribe here to a topic.
♦ Download the UN News app for your iOS or Android devices.
syria|IDPs 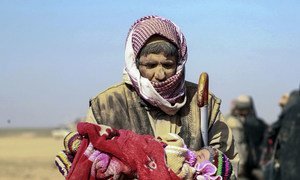 Syria: ‘Violence, displacement’ and cold kill 11 infants ‘in the past two days’

“Violence, displacement and extremely harsh conditions” in northern and eastern Syria have killed at least 32 children since December – including 11 infants in the past two days, the United Nations Children’s Fund (UNICEF) revealed on Thursday. 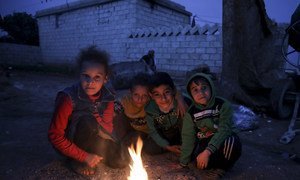 With people in Syria “suffering a cold, hard winter”, the United Nations Emergency Relief Coordinator on Wednesday appealed for international funding, backed by UN Security Council support for safe aid delivery, to alleviate the conditions faced by millions struggling for survival amidst rain, snowfall and freezing temperatures across the still war-torn nation.