“Our urgent challenge today is to heed the lessons of a period when human dignity was cast aside for a racial ideology,” Mr. Guterres said in an address early Saturday morning to the Holocaust Remembrance Ceremony held annually at New York City’s historic Park East Synagogue.

He recalled that the last time he addressed the event had been just four days after a man carrying “weapons of war” stormed into a synagogue on Shabbat in Pittsburgh shouting “all Jews must die”.

“When the bullets stopped, 11 people lay dead. Brothers. Husbands and wives. A 97 year-old woman. All gunned down in prayer. And targeted, it also appears at least in part, for performing a mitzvah – living their faith and welcoming the stranger – new immigrants to the Pittsburgh area.”

“It was a barbaric assault – the worst anti-Semitic attack in the history of the United States. In our sorrow, we joined hands here in this pulpit,” he said, adding that many faiths had been represented, Jews, Christians, Muslims and others, including the top leadership of the Appeal of Conscience Foundation, all declaring their utter opposition to hatred of any kind.

“I am afraid, however, that in the months since Pittsburgh we have had more reasons for profound concern,” lamented Mr. Guterres, noting that last month, headstones in a Jewish cemetery in Strasbourg were defaced with swastikas; this month, rocks were thrown through the windows of the central synagogue in Sofia; and for some time now, anti-Semitic attacks in the United States and Europe have been on the rise.

Statistics and polls paint a deeply worrying picture, he said, explaining that anti-Semitic incidents in the United States increased by 57 per cent in 2017.  One European poll reported last year that 28 per cent of Jews had experienced some form of harassment for being Jewish. Another revealed the strong persistence of classic anti-Semitic motifs.

“The old anti-Semitism is back – and getting worse,” said the UN chief, warning that Nazi symbols and slogans remain widespread, as anti-hate organizations track hundreds of neo-Nazi, pro-Nazi and white supremacist groups.

“And as we know all too well, where there is hatred of Jews, hatred of others is also near at hand,” he said, noting that indeed, the world was witnessing a disturbing increase in other forms of bigotry: attacks on Muslims were on the rise; intolerance was spreading at lightning speed across the Internet and social media; and hate groups were using social media to link up with like-minded bigots across borders.

“Hate is moving into the mainstream – as major political parties incorporating ideas from the fringes and parties once rightly considered pariahs are gaining influence,” he said, adding: “We should not exaggerate the comparisons to the 1930s, but equally we should not ignore the similarities.”

“This is the painful backdrop for today’s observance marking the anniversary of the liberation of the Auschwitz-Birkenau death camp. We are together to honour the memory of the six million Jews and millions of others who were systematically murdered.

“As the number of survivors dwindles, it falls to us to carry their testimony to future generations,” he said and the United Nations was strongly committed to being at the forefront of that work and teaching “our children to love before others teach them to hate.”

He said the UN’s Holocaust Outreach Programme has activities in dozens of countries. He had also recently asked his Special Adviser on the Prevention of Genocide to devise a global plan of action to deepen the world body’s efforts to counter hate speech.

“We are also striving at a deeper level to address the roots of the fears and anger that make people susceptible to populism and the divisive appeals of opportunistic political figures. That means working for a fair globalization and building democratic societies.”

“And it means ensuring that Governments and international organizations show they care about people and are attuned to their needs and aspirations. I include the United Nations in this. And this is a job for all societies, everywhere, Mr. Guterres said.

Echoing the Secretary-General, Arthur Schneier, Senior Rabbi of Park East Synagogue, said: “Anti-semitism does not just target Jews. It is an indicator of how societies treat other minorities.”

“If you want to judge a society, look at how the majority treats the minority,” he said, stressing that “we have to make sure we are on the side of good and of peaceful coexistence.”

The International Day of Commemoration in Memory of the Victims of the Holocaust is marked annually on 27 January and the theme of the 2019 edition of remembrance and education activities is “Holocaust Remembrance: Demand and Defend Your Human Rights”.

♦ Receive daily updates directly in your inbox - Subscribe here to a topic.
♦ Download the UN News app for your iOS or Android devices.
holocaust remembrance 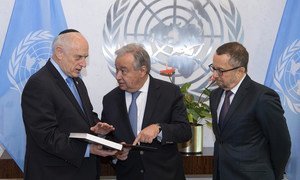 Political leaders have not yet taken up their responsibility to speak out loudly against neo-Nazism, United Nations Secretary-General António Guterres said on Friday, warning that anti-Semitism is on the rise.