© UNHCR/Diego Ibarra Sánchez
Hundreds of Syrian refugees were rescued from camps in Lebanon on Monday, as storms batter the country, causing tents and homes to flood. Pictured is a young refugee from Deir ez-Zor carrying blankets after a UNHCR distribution. January 2019.
25 January 2019
Humanitarian Aid

United Nations Secretary-General António Guterres has welcomed the announcement by the Emir of Qatar to allocate $50 million to support Syrian refugees and displaced persons affected by the recent severe weather in the Middle East.

Deputy UN Spokesman Farhan Haq on Thursday confirmed the allocation, telling reporters at the daily UN Headquarters press briefing that the UN chief was very grateful to the Emir and the people of Qatar for their generosity.

“As you know, the recent harsh winter conditions in the Levant has had a horrific impact on populations who were already vulnerable, both refugees as well as the communities hosting them,” Mr. Haq said, adding that humanitarian partners continue to respond to the needs of those affected and are reinforcing preparedness and mitigation efforts.

The UN Office for the Coordination of Humanitarian Affairs (OCHA) estimated in late January that nearly 2.4 million women, children and men across Syria would struggle during the winter season to get adequate warmth and would require targeted support.

This would include tens of thousands of newly-displaced people, including those in displacement sites and open areas, those who have been displaced multiple times and for long periods and now live in sub-standard shelters, but also returnees and host communities. 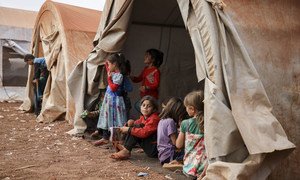 Conditions in a makeshift Syrian camp near the border with Jordan are “increasingly desperate” and “have become a matter of life and death”, United Nations officials warned on Tuesday, after at least eight children died there from extreme cold and a lack of medical care.