© UNHCR/Santiago Escobar-Jaramillo
A Venezuelan refugee rests at the Rumichacha International Bridge, the main point of entry into Ecuador via Colombia. In November 2018, some 2,500 Venezuelans were entering the country daily through this border.

At the same time, the UN refugee agency (UNCHR) warned of “mounting tension” in the troubled country as some 5,000 people a day continue to leave, a “significant number” of them in “dire” need of protection.

Speaking to journalists in Geneva on behalf of the High Commissioner for Human Rights, Spokesperson Rupert Colville said: “We have received information from credible local sources that at least 20 people have died after allegedly being shot by security forces or by members of pro-government groups during demonstrations on Tuesday and Wednesday with many other reported injured by bullets, buckshot and rubber bullets.”

Well over 350 people have also been detained in the recent protests, including 320 on 23 January alone, said the UN rights office, while staff have also reported raids on property in some of the poorest areas of Caracas where at least 180 protests have taken place this week.

He added: “The High Commissioner is extremely concerned, and I quote, ‘that the situation in Venezuela may rapidly spiral out of control with catastrophic consequences.’”

In her statement, Ms Bachelet insisted that it was vital to prevent a repetition of repression against protesters of the Government of President Nicolás Maduro, who was officially sworn back into office, just two weeks ago.

They should also respect everyone’s fundamental right to peaceful assembly and freedom of expression, he continued, adding that the UN rights chief wished to remind them that the “excessive, disproportionate or indiscriminate use of force is clearly and unequivocally prohibited under international law”.

Echoing comments by UN chief António Guterres on Thursday that everything must be done to avoid the kind of conflict “that would be a total disaster for Venezuela, for the Venezuelan people and for the region”, Ms. Bachelet urged the country’s political leaders to begin “immediate” talks to defuse the situation and find a practical long-term solution to the country’s entrenched social, political and economic crisis.

“She says it’s vital the authorities refrain from closing any remaining avenue of dialogue by prosecuting political and social leaders including members of the National Assembly,” Mr Colville said, in reference to the opposition-controlled chamber, which is led by Juan Guaidó, whose declaration assuming the interim-presidency has also sparked a diplomatic crisis, with some countries in the region, including the US, backing him, while others, including Russia and Cuba, have defended President Maduro.

Exodus of 5,000 each day continues: UNHCR

At the Venezuelan border, meanwhile, UNHCR said that thousands of people continue to leave the country, amid the ongoing economic and security crisis. More than three million have done so in recent years.

“The population movement so far has remained constant since last year, and that is some 5,000 Venezuelans leaving their country every day on average,” Spokesperson Liz Throssell said.

She confirmed that UNHCR staff were also monitoring the situation at “key” border areas. “We are providing assistance to those in need, those who may be crossing the borders,” Ms Throssell explained. “With the mounting tension that we have seen between Venezuela and its neighbours, UNHCR has reinforced its presence along these borders; we are monitoring populations movement and we have been also preparing for any potential change in the number of refugees and migrants leaving Venezuela.”

Commenting on the situation of those travelling outside Venezuela to neighbouring countries, the UNHCR spokesperson noted that “we have seen a significant number in dire need of international refugee protection and humanitarian assistance. 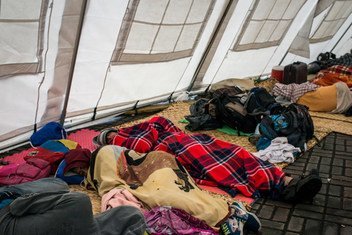 Reports of violence and casualties linked to unrest in Venezuela should be investigated transparently and independently, UN Secretary-General Antonio Guterres said on Thursday, before calling for calm. 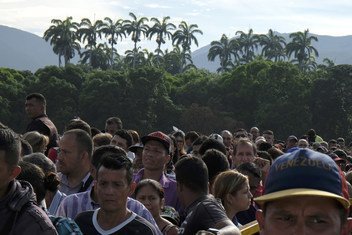