© UNHCR/Anna Camilleri
Valleta, Malta - Disembarkation of refugees and migrants rescued by the NGO vessels Sea Watch and Sea Eye, after both boats were stranded at sea without a port of safety for 19 days and 12 days respectively. 9 January 2019.

A spate of migrant shipwrecks and rescues in the Mediterranean Sea in recent days is evidence that urgent action is required from European States to address the issue, the UN said on Tuesday

The warning from UN Refugee Agency (UNHCR) and the UN Migration Agency (IOM) comes after close to 170 people are believed to have drowned in separate tragedies off the Libyan and Moroccan coastlines late last week.

Survivors’ testimonies indicate that more than 100 people died in one incident in Libyan waters on Friday 18 January, including 10 women – one of whom was pregnant - and two children.

“Three men were rescued 50 miles off Libya from a sinking boat by an Italian Navy helicopter and brought to Lampedusa, Italy,” IOM spokesperson Joel Millman said. “IOM staff spoke to the three survivors who said the boat carried 120 people on board. Based on their testimony, IOM estimates that 117 people went missing and presumably drowned at sea before rescue services could reach them.”

According to IOM, 203 people have died on the three main Mediterranean Sea routes to Europe from North Africa and Turkey in the first three weeks of 2019.

This is the fourth January in a row that more than 200 migrants and refugees have drowned trying to reach Europe on unauthorized routes, often crammed into unsuitable boats supplied by traffickers, the agency said in a statement.

Migrants shipped back and detained in Libya

In a related development, IOM reported that nearly 150 migrants had been “returned” to Libya and placed in custody after being rescued by a cargo ship.

This is despite serious and longstanding concerns over conditions in the country’s detention centres, amid ongoing insecurity in Libya since the ousting of President Muammar Gaddafi in 2011.

“IOM confirmed yesterday that the Sierra Leonean flag cargo vessel Lady Sham returned 144 rescued migrants to Libya. It remains unclear when and from where these individuals departed,” Mr. Millman said.

“IOM staff counted 26 women and four children among those rescued and taken to a detention centre in Misrata. IOM staff are monitoring their conditions and assessing their needs.”

In Geneva, UNHCR spokesperson Charlie Yaxley confirmed that migrants and refugees held in Libya suffered terribly. “Many report going hungry for days on end, not being able to receive urgent medical care that they require,” he said. “Others allege to have been tortured in some of these centres, the non-official centres, are run by traffickers and smugglers, where we have no access to those at all.”

UNICEF/UN052822/Romenzi
A migrant sits in a patch of light entering through one of only two windows as he tries to warm himself up at a detention centre, located in Libya, 1 February 2017. At the time of UNICEF’s visit, 160 men were being detained there.

The UNHCR spokesperson also spoke of the agency’s “alarm” at reports that the Libyan coastguard had been unable to respond to emergencies because of fuel shortages, before urging Europe’s politicians to recognize that Libya was not a safe place for vulnerable people on the move.

“The automatic use of detention for rescued refugees and migrants, the extremely volatile situation with regards to the outbreaks of violence and, together, with the widespread reports of human rights violations, they play just a part of why we consider Libya to be, to have no safe port for docking rescued passengers at the moment,” he insisted.

While most migrants and refugees heading for Europe now attempt to do so by reaching Spanish shores, Italy remains a target destination, albeit on a much smaller scale than in recent years.

Citing data from the Italian authorities, IOM’s Mr. Millman said that 155 migrants have arrived by sea to Italy so far this year, meaning that January 2019 was “on track” to be the lowest month for arrivals in more than three years.

At the same time, he noted that the volunteer rescue vessel Sea-Watch 3 - which saved 47 migrants on Saturday - has yet to receive permission to dock in Europe, before reiterating IOM’s call for a “safe and orderly disembarking mechanism in the central Mediterranean”.

UNHCR’s Mr. Yaxley, meanwhile, when asked which European countries were responsible for the difficulties encountered by rescue vessels, explained that what was needed was a coordinated, multilateral policy.

“I don’t think we can point the finger at any one State,” he said. “The Mediterranean States have been at forefront of receiving new arrivals crossing by sea for many years…it needs European solidarity, it needs European support.”. He said the tragic deaths represented the end of “desperate journeys where the refugees and migrants have faced quite horrific experiences and traumas along the way.”

IOM data indicates that 4,883 migrants and refugees reached Europe by sea in the first 20 days of 2019. 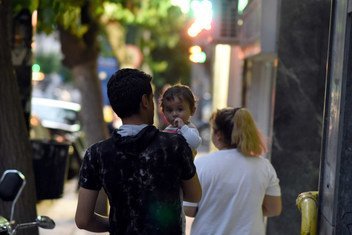 European authorities are “struggling” to meet the needs of irregular migrants and refugees who are wrongly accused of spreading sickness among host communities, the World Health Organization (WHO) said on Monday, at the launch of its first report on the subject. 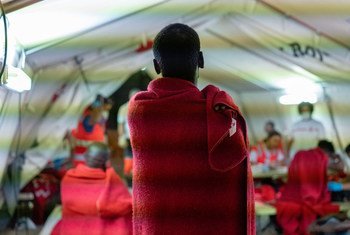 The United Nations refugee agency, UNHCR, stated on Saturday that “no effort should be spared” in saving lives at sea, following reports of two new shipwrecks on the Mediterranean Sea, in which some 170 people either died or went missing.