Michael Møller, head of the UN in Geneva, has warned delegates to the Conference on Disarmament that cyber-security challenges, and the existence of new weapons systems and technologies, are not being sufficiently addressed or reflected in current arms control regimes.

Mr Møller, who acts as the Secretary-General of the Conference, was speaking at the opening of the first 2019 meeting of the Geneva-based Conference, which, although it is the only multilateral forum for disarmament negotiations, has been deadlocked for over 20 years: the last arms control agreement successfully negotiated by the body was the Comprehensive Nuclear-Test-Ban Treaty, in 1996.

The UN Geneva chief said that the realities of today make a compelling case for a renewed sense of urgency, and a collective commitment and determination in pursuing disarmament. He warned that the nuclear threat remains high: nuclear programmes continue to be pursued, and nuclear arsenals enhanced, and that military and security expenditures have reached record levels. Despite these, and other risks, multilateralism is “under fire at the time we need it most,” and “meaningful dialogue on the right approach to a host of disarmament issues continues to elude us.

2019 marks the 40th anniversary of the Conference on Disarmament, described by Mr. Møller as an occasion to “recall why these mechanisms, with their regulations and rules of procedures and (spoken and unspoken) codes of conduct, were established.” They are important, he continued, because they provide a neutral place for dialogue, where different positions can be acknowledged and transcended.

Striking a positive note, Mr. Møller pointed to progress made in 2018 – when, for the first time in several years, four reports were adopted by consensus, paving the way for further work including technical discussions – and the hope that momentum generated by these developments will continue in this and future Sessions of the Conference.

The Conference on Disarmament, established as the single multilateral disarmament negotiating forum of the international community, is not formally a UN body but reports annually, or more frequently as appropriate, to the UN General Assembly.

Currently, the consensus-based body focuses primarily on the following issues: cessation of the nuclear arms race and nuclear disarmament, prevention of nuclear war, including all related matters, prevention of an arms race in outer space; effective international arrangements to assure non-nuclear-weapon States against the use or threat of use of nuclear weapons; and  new types of weapons of mass destruction and new systems of such weapons including radiological weapons; comprehensive programme of disarmament and transparency in armaments.

♦ Receive daily updates directly in your inbox - Subscribe here to a topic.
♦ Download the UN News app for your iOS or Android devices.
conference on disarmament|denuclearization 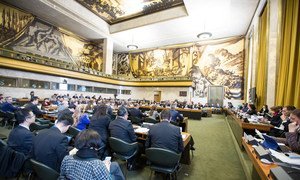 Warning that nuclear weapons pose catastrophic risks to human life and the environment, United Nations Secretary-General António Guterres on Monday called on the international community to make a reinvigorated push to rid the world of such weapons.

Secretary-General António Guterres today expressed the readiness of the United Nations to help bring into force the global treaty banning nuclear tests, adopted more than 20 years ago, while noting that the “destabilizing and provocative” actions by the Democratic People’s Republic of Korea (DPRK) seek to undermine the global norm against nuclear explosions.