UNCTAD/Jan Hoffmann
Shipping containers at a port in the Democratic Republic of São Tomé and Príncipe. (file)

The global economy grew at a “steady” 3.1 per cent last year and similar levels of growth are expected in 2019, but these headline figures mask growth that is uneven and often failing to reach where it is most needed, the UN’s chief economist warned on Monday.

“We still have relatively strong growth, but we do see rising risks on the horizon and an increasing likelihood that some of these risks might actually materialize,” said Elliott Harris, United Nations Chief Economist, in comments coinciding with the launch of the World Economic Situation and Prospects 2019 (WESP) report.

Among these looming dangers, accelerating trade tensions are already “having an impact” on global trade and employment, Mr. Harris told UN News.

In addition, rising national debt is also crippling many countries’ ability to provide basic services, but this and other risks – such as those from climate change and waning support for international cooperation – could be avoided or minimized if countries worked together to do so, the UN’s top economist insisted.

With mounting pressures in the areas of international trade, international development finance and tackling climate change, the report underscores that strengthening global cooperation is central to advancing sustainable development.

Yet, these threats come at a time when international cooperation and governance are more important than ever – many of the challenges laid out in the 2030 Agenda for Sustainable Development are global by nature and require collective and cooperative action. Waning support for multilateralism also raises questions around the capacity for collaborative policy action in the event of a widespread global shock.

📈 Global #economy set to grow steadily at around 3% in 2019 &amp; 2020, but there are signs that growth has peaked.Read #WESP2019, the definitive UN DESA report on the economy https://t.co/XopxOrxfzA pic.twitter.com/fL5en6KWCL

According to the WESP report, published by the UN Department of Economic and Social Affairs, more than half the world’s economies saw growth accelerate in 2017 and 2018.

Developed economies grew at 2.2 per cent in both years, while unemployment rates dropped.

Among developing economies, East Asia and South Asia saw the strongest gains in 2018, at 5.8 per cent and 5.6 per cent respectively, while commodity-exporting countries continued their “gradual recovery”.

This improvement was particularly true for fuel-rich emerging nations, despite high debt levels caused by a fall in commodity prices, in 2014-15.

Although the overall picture among developing economies is largely positive, many are nonetheless experiencing “uneven progress”, the UN report cautioned, amid falling individual (per capita) wealth in several nations.

“Further declines or weak per capita growth are anticipated in 2019 in Central, Southern and West Africa, Western Asia and Latin America and the Caribbean – homes to nearly a quarter of the global population living in extreme poverty,” it noted.

And even where growth is strong, it is “often driven by core industrial and urban regions”, the WESP 2019 report continued, such that rural areas are being left behind.

To overcome this, and for poverty to be eradicated by 2030, the UN report suggests that there will need to be “both double-digit growth in Africa” along with “steep reductions” in unequal pay levels.

And as a result of the United States-China uncertainty, the expectation is that trade volumes in 2019 “will be lower” still, Mr. Harris suggested.

Government subsidies have to some extent softened the impact of the tariff hikes in the US and China – whose growth is expected to decrease from 6.6 per cent in 2018 to 6.3 per cent this year – but the risk is that developing economies may suffer the fallout too, unless the dispute is settled.

“If the trade dispute becomes more widespread, we will likely to see disruptions of global value change,” Mr. Harris explained. “Bear in mind that the participation of global trade has been one of the ways that developing countries have participated in the rising global prosperity and have accelerated their own developments. So, anything that disrupts that, of course, (will) have a negative impact on their abilities to increase their levels of prosperity and to develop sustainably.”

This cautionary assessment is telling because the US in 2018 contributed more to global trade than Japan or the European Union, according to UN economists at UNCTAD, the UN Conference on Trade and Development, which contributed to the WESP 2019 report.

Rising interest rates in the US – or a strengthening of the dollar – could also make matters worse for fragile emerging economies, the WESP report noted, adding that many low-income countries have already seen a “substantial rise” in interest repayments on their debt.

These include Lebanon and Sri Lanka, where over 40 per cent of Government revenue is spent servicing its debt, as well as Pakistan and Jamaica, where around a quarter of their budget is used to pay interest on national debt, representing a major constraint on public services.

On the European Union’s prospects, the WESP report estimates growth of two per cent for the next two years, with much stronger performances, potentially, from States who became members since 2004.

The pack is led by Poland, which saw its economy grow by five per cent in 2018.

The bloc’s biggest economy, Germany, is set to see more moderate growth however, at 1.8 per cent, amid potential disruption to the domestic car industry from “new technologies, new competitors and significant legal and financial consequences from past sales practices related to the diesel technology”.

France is also set to see lower-than-average growth (1.8 per cent), linked to its weaker export outlook, while the UK (1.4 per cent) is projected to pay for trade uncertainty linked to its plans to exit the EU, or Brexit, with “companies moving assets or diverting investment from the UK to the EU”, WESP 2019 notes.

The ‘Brexit’ fallout may also be felt outside the EU, the UN report warns, with a possible “10-15 per cent decline in funding available to EU accession countries”.

In most Commonwealth of Independent States (CIS), which includes Russia, most saw accelerating growth and slowing inflation last year, amid “supportive” commodity prices.

Despite this, overall growth is forecast to slow “modestly” this year to two per cent, and 2.5 per cent in 2020, WESP 2019 suggests, amid concerns that strong expansion in smaller economies may be unsustainable, while lower public spending is expected in others.

Focusing on Russia, the UN report notes that lifting the value-added tax (VAT) rate may encourage inflation and curb household spending, while ongoing sanctions could deter investment from abroad.

Other large commodity-exporting countries, such as Brazil and Nigeria, should see a “moderate pickup “in growth in 2019-2020, “albeit from a low base”.

Frequently hailed as a 21st century version of the ancient Silk Road trade route, the region “should benefit from … upgrades to countries’ railway, road and energy infrastructure, improved connections with China and Europe, and better market access,” the report explains.

Elsewhere, South-Eastern Europe saw faster growth in 2018 and its overall gross domestic product (GDP) is expected to expand by 3.7 per cent in 2019 and 2020.

Serbia, the region’s largest economy, benefited from double-digit growth in investment amid strong performances in farming and construction, while Albania also saw “solid” economic performance, WESP 2019 noted, before cautioning that longer-term improvements risk being “constrained”, unless there are improvements in industrial infrastructure and dependence on foreign financing. 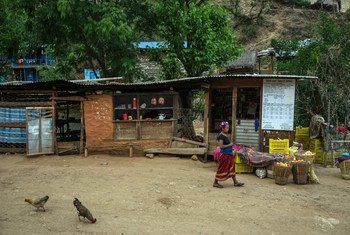 A “pragmatic, strategic and evolutionary” approach is needed in the least developed countries to strengthen their public sector capacity, bring about institutional reform and promote policy learning, a new United Nations report has urged.