Half a capital city destroyed, 220,000 reported dead and 1 million residents displaced. This was the toll of the 2010 Haiti earthquake, which struck on 12 January, nine years ago.

Staff at the UN Mission in Haiti were also affected, and there were 102 UN casualties, including the Secretary-General’s Special Envoy, Hédi Annabi and his deputy, Luiz Carlos da Costa. It was the “biggest single loss of life in the history of UN Peacekeeping,” the then-President of the UN Staff Union, Stephen Kisambira, said at the time.

One of the survivors was Sophie Boutaud de la Combe, today the head of communications for the UN Mission for Justice in Haiti (MINUJUSTH), who was seven months pregnant at the time and just a few days away from home leave. She had been in the headquarters of MINUJUSTH’s predecessor, the UN Stabilisitation Mission in Haiti (MINUSTAH), when the quake hit.

The building completely collapsed, but Ms. Boutaud de la Combe managed to escape through a collapsed wall. For many hours, she and her surviving colleagues searched through the rubble, looking for anyone still trapped under the building. Two days later, she reluctantly left Haiti, a situation she describes as “a trauma,” her instinct being to help the UN and the people of Haiti. She eventually returned to the country in 2013, happy to be able to play a part in the rebuilding of the country, and honour her lost colleagues with her work.

Some nine years after the earthquake, the situation in Haiti is very different. The government, says Ms. Boutaud de la Combe, is now much better prepared for similar natural disasters. “A few months ago there was an earthquake in the north of the country. The state was prepared and they sent their people to support those affected, without MINUJUSTH involvement. It was not a major earthquake, but now the population knows how to react. And most importantly, we hear regularly how important it is to build better, to build strongly in case an earthquake would hit, not to endanger the people.”

♦ Receive daily updates directly in your inbox - Subscribe here to a topic.
♦ Download the UN News app for your iOS or Android devices.
Haiti Earthquake Anniversary 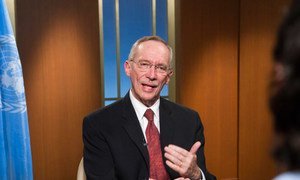