UNICEF/Vlad Sokhin
Dada, 15, was abducted by Boko Haram and became pregnant with her daughter after she was raped while in captivity.
9 January 2019
Peace and Security

Following an upsurge in violence in north-east Nigeria, which was brought to global attention five years ago with the abduction by Boko Haram extremists of the Chibok schoolgirls, tens of thousands of innocent civilians continue to flee, prompting “grave concern” from the United Nations envoy there.

An attempted attack on 28 December in Monguno, further exacerbated the situation, leading to more displacement.

It is heart-wrenching to see so many...living in congested camps, or sleeping outside with no shelter – UN Humanitarian Coordinator

“The impact of the recent fighting on innocent civilians is devastating and has created a humanitarian tragedy,” said UN Humanitarian Coordinator Edward Kallon after visiting Monguno and Teachers Village camp for internally displaced people in Maiduguri.

“It is heart-wrenching to see so many of these people living in congested camps, or sleeping outside with no shelter,” he lamented.

“The United Nations is extremely concerned about the impact that violence in north-east Nigeria, especially in Borno State, is having on civilians”, he added.

In recent weeks, more than 30,000 internally displaced people have arrived in Maiduguri, mainly from Baga – the majority since 20 December, often after arduous journeys with young children.

Of these, an estimated 20,000 IDPs in Teachers Village camp in Maiduguri has stretched its capacity beyond the limit.

And while it is still unclear how many people are taking refuge in Monguno, tens of thousands are in need of humanitarian assistance, notably shelter, food, water and sanitation.

Some 260 aid workers have been withdrawn from the local government areas of Monguno, Kala/Balge and Kukawa, which have been affected by the conflict since November. This represents the largest withdrawal of aid workers since the international humanitarian response was scaled up in 2016, hindering the delivery of vital aid to hundreds-of-thousands of people.

While aid workers have begun returning to respond to the urgent, life-saving needs, the lack of a secure operating environment continues to prevent normal humanitarian activities.

♦ Receive daily updates directly in your inbox - Subscribe here to a topic.
♦ Download the UN News app for your iOS or Android devices.
nigeria|armed violence|security council 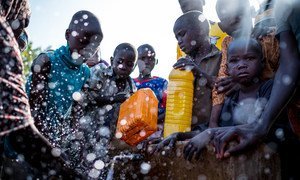 After fleeing terrorist attacks, as well as clashes between Government forces and militia, more than 2,000 newly displaced Nigerians have arrived in an already over-stretched camp known as Teacher’s Village, in Maiduguri, the capital of the country’s Borno State.