WFP’s demands were issued in a letter to the Houthi leadership as well as in a news release on New Year’s Eve.

“This is an issue that affects not just WFP but all aid agencies working in Yemen and indeed in war zones everywhere and no-one can say for certain how widespread this problem is”, said WFP spokesperson Hervé Verhoosel, noting that humanitarian food assistance was being diverted in Houthi-controlled areas, including the capital of Sana’a, and, to a lesser extent, in the Government-controlled areas as well.

According to news reports, factions and militias on both sides of the conflict have blocked food aid from reaching groups suspected of disloyalty, diverting it instead to front-line combat units or selling it for a profit on the black market.

The UN agency has learned that many desperately poor people have taken to selling part of their food rations for education, medicines and rent.

An ounce of prevention worth a ton of cure

The Yemen Government gave WFP permission to biometrically register beneficiaries, by identifying and authenticating each individual based on person-specific data.

So far, WFP monitoring has identified seven centres in Sana’a city where an estimated 1,200 metric tons of food was diverted in August and September, equivalent to about one per cent of the food provided nationally each month.

“It is our monitoring systems that detected there was a problem”, Mr. Verhoosel explained. “We are committed to ensuring our food assistance reaches those who most need it.”

As the local partner organization involved in the abuse has at the same time helped provide food assistance to three million people, WFP underscored that the authorities must investigate and dismiss those responsible, regardless of whether the corruption was carried out by the Government or non-governmental organizations.

“To improve the support to beneficiaries, we have been looking into the introduction of cash-based transfers in some areas”, said Mr. Verhoosel. “However, given the risk of corruption, we have made it clear to the de facto authorities that we will not introduce cash-based transfers unless we are authorized to implement a biometric identification system that uses personal data, including iris scans and ten-finger prints”.

WFP is tackling the issue by tracking and monitoring suspected locations and closely inspecting distribution centres.

“The de facto authorities in Sana’a have a responsibility to take action against those involved in stealing from the beneficiaries and in trading of food aid,” he stressed. “They should allow an independent beneficiary selection process and a biometric-based registration system.”

Mr. Verhoosel said that the biometric identification system had been rolled out in Government-controlled areas and that authorities in Sana’a had yet to agree to implement the system.

Meanwhile, Martin Griffiths, the UN Special Envoy for the country, is set to visit Yemen and Saudi Arabia on Saturday in his latest round of consultations with the warring parties, where a fragile truce has been holding in the key port city of Hudaydah, since 18 December.

According to the UN in Geneva, Mr. Griffiths is expected to meet with the Ansarallah leadership, (the official name of the Houthi movement), as well as with the head of the UN-convened Committee monitoring the Hudaydah ceasefire, General Patrick Cammaert; as well as UN Humanitarian Coordinator Lise Grande in Sana’a. He will then meet the President of Yemen, Abdrabbuh Mansur Hadi, and other officials in Riyadh. 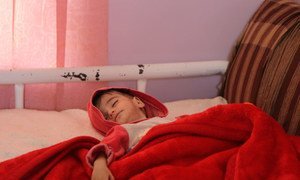 After uncovering evidence that humanitarian food supplies are being diverted in Yemen’s Houthi-controlled capital, Sana’a, and other parts of the country, the United Nations World Food Programme (WFP) has demanded an immediate end to the practice.