The UN Secretary-General said on Friday he “deeply regrets” the Somali Government’s decision to expel his Special Representative in the country, adding that he had “full confidence” in Nicholas Haysom’s abilities and track record as an international civil servant.

According to news reports, Mr. Haysom was accused of violating diplomatic rules and overstepping his authority by the Government, in questioning the legal basis for the arrest of a former al-Shabab deputy leader early last month, who was standing for election in South West state.

The defector from the jihadist group, Mukhtar Robow, had not been properly rehabilitated and was therefore ineligible to stand as a candidate, according to Somalia’s Ambassador to the UN, Abukar Dahir Osman, who spoke in a Security Council meeting on Thursday. He urged the UN not to interfere in the “internal affairs” of the country which lay beyond its agreed mandate.

The Secretary-General has full confidence in Mr. Haysom, an experienced and respected international civil servant who has distinguished himself in numerous senior leadership roles

Highlighting his deep regret over the Government decision, first reported on Tuesday, UN chief António Guterres said in a statement issued by his Deputy Spokesperson on Friday that any declaration Mr. Haysom was persona non grata in Somalia, does not accord with diplomatic rules. “The doctrine of persona non grata does not apply to, or in respect of, United Nations personnel,” he said.

“As described in the 1961 Vienna Convention on Diplomatic Relations, the doctrine applies to diplomatic agents who are accredited by one State to another in the context of their bilateral relations.  The United Nations is not a State and its personnel are not accredited to the States where they are deployed, but work under the sole responsibility of the Secretary-General,” the statement continued.

“The Secretary-General has full confidence in Mr. Haysom, an experienced and respected international civil servant who has distinguished himself in numerous senior leadership roles, in the field and at UN Headquarters.”

The South African lawyer has served  as Special Envoy for Sudan and South Sudan, head of the UN mission in Afghanistan, UNAMA, and also worked in the Executive Office of the Secretary-General, after heading up the UN constitutional support team in Iraq during the critical 2005-2007 period.

In the 1990s, he served as Chief Legal and Constitutional Adviser in the Office of President Nelson Mandela, South Africa's first democratically-elected leader.

Mr. Guterres said he was “totally committed to ensuring that the needs of the Somali people are at the forefront of the work of the United Nations in Somalia”, adding that the UN support mission there, UNSOM, “needs to be able to carry out in the most effective manner its mandate to support the country.”

He said that he would therefore appoint “in due course” a new Special Representative for Somalia and Head of UNSOM.

“The Secretary-General remains strongly committed to assisting Somalia in its efforts to achieve peace, stability and prosperity for all” his statement concluded.

♦ Receive daily updates directly in your inbox - Subscribe here to a topic.
♦ Download the UN News app for your iOS or Android devices.
Somalia|UNSOM|Nicholas Haysom 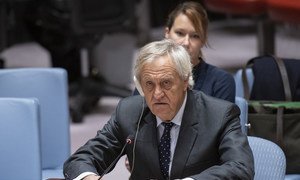 ‘Milestones are clear’ for ‘significant progress’ in Somalia during 2019, Security Council hears

Somali Government efforts to build a lasting peace through political reform and transformation have progressed along a “positive trajectory” but everyone involved in the process needs to “pull in the same direction”, the UN Special Representative in the country told the Security Council on Thursday. 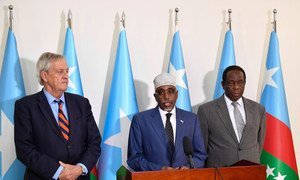