World Bank/Dominic Chavez
Residents living in a slum in Dhaka, the capital of Bangladesh.

“There are credible reports of fatalities and numerous injuries on polling day alone”, OHCHR spokesperson Ravina Shamdasani said in Geneva on Friday.

Amidst allegations of vote-rigging, a landslide victory was declared for incumbent Prime Minister Sheikh Hasina, with the opposition leader rejecting the results.

“There are worrying indications that reprisals have continued to take place, notably against the political opposition, including physical attacks and ill-treatment, arbitrary arrests, harassment, disappearances and filing of criminal cases”, continued the spokesperson, noting reports of disproportionate “violent attacks and intimidation” by ruling party activists, and, in some cases, with the involvement of law enforcement officials.

Ms. Shamdasani cited reports of media intimidation and property damage, as well as other constraints that have hindered free and public reporting on the elections.

She asserted that at least two journalists covering the election have been arrested under the 2018 Digital Security Act, which, according to news reports, suppresses free speech and press freedom.

Moreover, since 10 December at least 54 news and other websites have been blocked, and temporary internet restrictions around election day have constrained freedom of expression.

Pointing to reports of police breaking up peaceful protests demanding a re-election, and arrests under laws such as the Digital Security Act, she said that the space for human rights defenders and organizations, political opposition and the general public, to speak out about the election, had become “restricted”.

“Restrictive legislation, including this Act, should be reformed so that human rights defenders, civil society, journalists and all members of the public are protected in their exercise of the freedoms of expression, peaceful assembly and association and engage freely in debating the election and Bangladesh’s democratic and development processes”, stressed the OHCHR spokesperson.

The UN agency urged the authorities to carry out “prompt, independent, impartial and effective investigations” into all alleged violence and human rights violations surrounding the elections, and to hold those responsible accountable, “regardless of their political affiliations”.

“We call on the authorities to take urgent measures to prevent further reprisals, and to ensure that law enforcement authorities exercise their powers strictly in accordance with the rule of law and principles of legality and proportionality,” Ms. Shamdasani concluded. 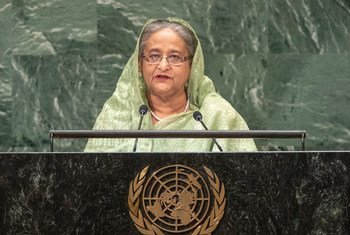 The United Nations said on Monday that it is aware of violent incidents and reports of irregularities in Sunday’s general elections in Bangladesh.