UNAMA/Fardin Waezi
A busy roundabout in Kabul, the capital of Afghanistan; the UN has welcomed a ceasefire for the Eid holiday.

The United Nations Assistance Mission in Afghanistan, known by its acronym UNAMA, condemned an attack on a government compound in the country’s heavily populated capital city of Kabul on Monday night, which news reports say left more than 40 dead.

“These attacks cause untold human suffering to Afghan families,” Tadamichi Yamamoto, the Secretary-General’s Special Representative for Afghanistan and head of UNAMA said on Tuesday.

Dozens were reportedly injured during the attack on a government ministry building that trapped hundreds of employees.

According to news reports, the incident started with a suicide car bomb blast near the building's entrance, before gunmen stormed inside. While it is not yet known who carried out the attack, similar assaults have been waged by both the so-called ISIL, or Da'esh terrorist group, and Taliban fighters.

“The United Nations unequivocally condemns them, as there is no justification whatsoever for such attacks,” stressed Mr. Yamamoto.

The UN maintained that those who have organized and enabled such attacks must be brought to justice and held accountable, and also called again on all parties to uphold their obligations under international humanitarian law to protect civilians from harm.

The Organization continues to stand in solidarity with all Afghans and remains committed to an Afghan-led peace process to end the ongoing war and enable the government to allocate more resources to protect all its citizens from such atrocities.

On behalf of the UN in Afghanistan, Mr. Yamamoto expressed his deep condolences to the victims’ families and wished the injured a speedy recovery.

While expressing their sympathy and concern, the Security Council issued a statement underlining that the perpetrators, organizers, financiers and sponsors “of these reprehensible acts of terrorism” needed to be held accountable and brought to justice.

They also urged all States, in accordance with their obligations under international law and relevant Security Council resolutions, to cooperate actively with the Afghan Government and all other relevant authorities to this end.

“The members of the Security Council reaffirmed that terrorism in all its forms and manifestations constitutes one of the most serious threats to international peace and security,” said the statement.

Moreover, they reiterated that any acts of terrorism are criminal and unjustifiable, regardless of their motivation, wherever, whenever and by whomsoever committed.

The Council also reaffirmed the need for all States to combat “by all means,” in accordance with the UN Charter and other obligations under international law, threats to international peace and security caused by terrorist acts. 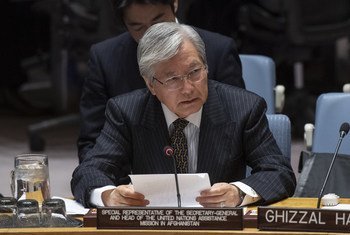 A negotiated end to the 17-year conflict in Afghanistan “has never been more real…than it is now”, the head of the United Nations peace mission in the country has said, highlighting a series of important milestones achieved over recent months.