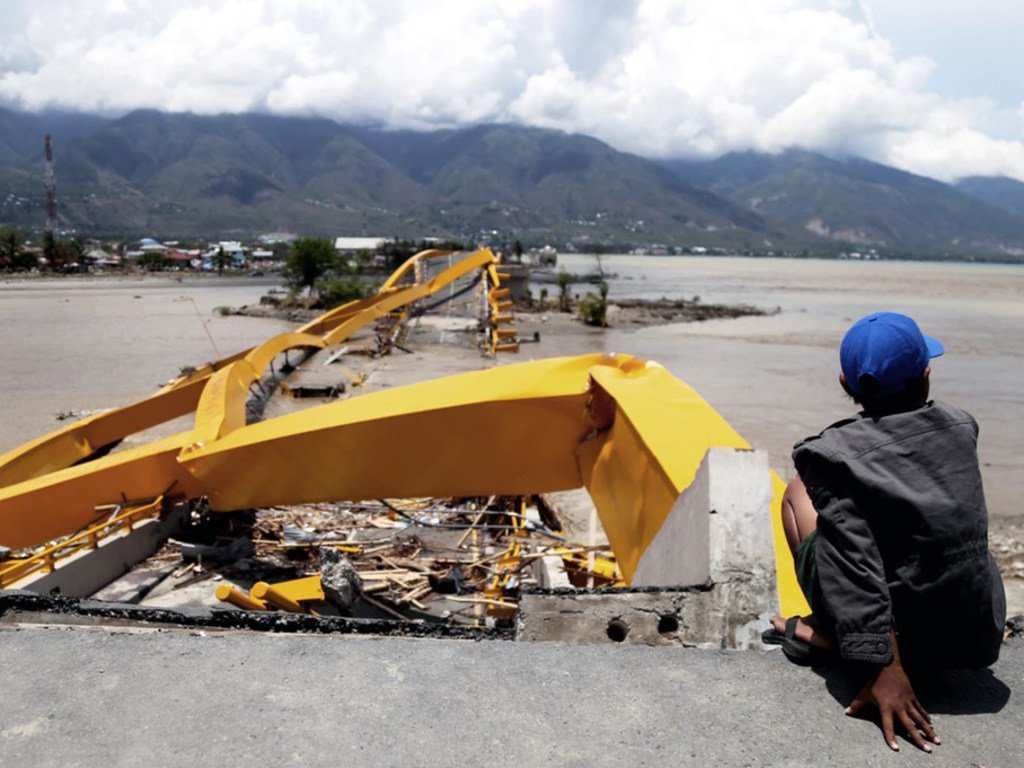 OCHA/Anthony Burke
The Indonesian island of Sulawesi was struck by an earthquake and tsunami in September 2018. More than 2,000 people died and 80,000 were displaced. Here, a man looks at a destructed road and bridge in the city of Palu.
24 December 2018
Humanitarian Aid

Indonesians are being warned to stay away from beaches along the Sunda Strait, between the islands of Sumatra and Java, following this weekend’s devastating tsunami in the area, which government and humanitarian agency reports indicate has claimed hundreds of lives, with the total likely to rise.

The tsunami struck coastal areas to the west of the capital Jakarta, in the middle of Saturday evening, local time, destroying houses, hotels and businesses. Latest reports suggest that the devastating waves were triggered by underwater landslides, following the eruption of the Anak Krakatau volcano.

The worst affected areas are Pandeglang and Serang districts in Banten province, and South Lampung and Tanggamus districts in Lampung province, according to the UN Office for the Coordination of Humanitarian Affairs (OCHA). 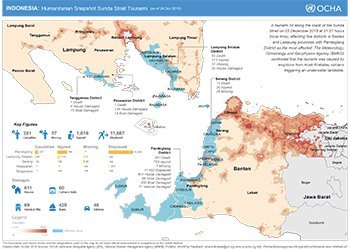 In an update at around 7am local time, OCHA reported that there were just over 1,000 injured, more than 50 people missing; and close to 12,000 displaced by the tsunami.

There are also reports that highways and road networks in the affected areas have been disrupted, impacting the emergency relief effort, and making it hard to assess the full extent of the damage. The Christmas holiday season means that many tourists have also been caught up in the disaster.

The Indonesian National Disaster Management Agency (BNPB), military, police, the National Search and Rescue Agency, national and local authorities – together with volunteers - are providing immediate assistance to those affected, added OCHA, noting that so far, the Indonesian Government has not requested international assistance.

A high-tide warning also remains in effect and people have been advised to stay clear of low-lying areas. Local branches and volunteers from the Indonesian Red Cross are helping people evacuate away from the coastline to higher ground.

“People are understandably jittery…this is a traumatic event that has shaken people” it said in a news release issued on Monday.

The UN Office for Outer Space Affairs (UNOOSA) - which works for international cooperation in peaceful uses of outer space, including disaster risk reduction and response – has requested the activation of the International Charter “Space and Major Disasters” on behalf of the Indonesian space agency (LAPAN).

The International Charter is a worldwide collaboration among space agencies through which useful satellite-data is made available to support disaster response efforts.

Since its first activation in November 2000, the Charter has released data on hundreds of occasions, helping with the relief effort for floods, hurricanes, tsunamis and earthquakes.

Indonesia, given its geographical location along the so called “Ring of Fire” region in the Pacific – an earthquake-prone region, with several active volcanoes – has been hit hard by frequent earthquakes and tsunamis.

Just three months ago, in late September, more than 2,000 people were killed when a powerful earthquake struck just off the central Indonesian island of Sulawesi, setting off a tsunami that engulfed the coastal city of Palu.

In one of the worst disasters in modern history, the region was also hit by a devastating tsunami in December 2004, that claimed over 230,000 lives in 14 countries along the Indian Ocean, mostly in Indonesia.

This is a developing story, please visit the ReliefWeb portal for humanitarian updates on the disaster.