MONUSCO/Alain Likota
Electoral Preparations in Democratic Republic of Congo: a reminder of the officer's role before, during and after the polls.
19 December 2018
Peace and Security

As the people of the Democratic Republic of the Congo (DRC) prepare to vote in next week’s long-awaited presidential election, UN Security Council members on Tuesday expressed their conviction that the 23 December vote should be viewed as an “historic opportunity” for the country.

In a statement issued on the electoral preparations, Council members recognized this moment as charged with potential “for the first democratic and peaceful transfer of power,” and as an opportunity for “the consolidation of stability in the country and the creation of the conditions for its development.”

This would mark the country’s first democratic transfer of power since 1960, and the first change in the Presidency since Joseph Kabila’s took office in 2001, in wake of his father’s assassination. He is stepping down after 18 years--two years after his mandate officially expired.

Members of the Security Council “expressed concern” that just days ahead of the election, the electoral campaign has been the subject of violence resulting in “loss of life and significant damage.”

“The members of the Security Council reiterated their call on all parties--Government and opposition- to engage peacefully and constructively in the electoral process,” the Council’s statement read, “in order to ensure transparent, peaceful and credible elections and to preserve peace and stability in the Democratic Republic of the Congo and the region.”

The violence in the capital, along with a fire that destroyed thousands of voting machines there several days ago, have prompted a ban on campaigning in the city by its governor as of 19 December.

Reaffirming a November call for a peaceful electoral process, the Council urged Congolese actors to participate with “full respect for the 31 December 2016 Agreement,” a deal that envisioned the current elections to be held at the end of 2017.

The Council has “called on all political players to uphold the freedom of expression, assembly and unhindered campaigning which are the hallmarks of the democratic exercise of the will of the people during this period.” 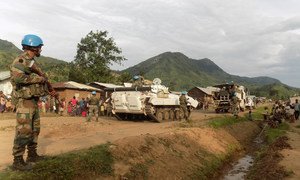 Deadly pre-election violence in the Democratic Republic of the Congo (DRC) sparked by police reportedly firing live ammunition at opposition supporters, has been condemned by the UN’s top rights official, Michelle Bachelet. 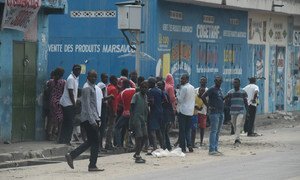 Amid ongoing political tension in the Democratic Republic of the Congo (DRC), violent actions by the security forces during recent protests in Kinshasa and other cities suggest “deliberate intention to suppress civil and political rights,” the United Nations human rights office reported on Friday.