Government Offices of Sweden/Ninni Andersson
Yemen’s foreign minister Khaled al-Yamani (left) and Head of Ansarullah delegation Mohammed Amdusalem (right) shake hands on a ceasefire in and around the Yemeni port of Hudaydah, in the presence of the UN Secretary-General António Guterres (centre) and the host of the meeting, the Swedish Foreign Minister Margot Wallström.

Speaking on the last day of UN-led talks in Sweden to decide the future of the war-torn country, where its people are in the grip of the world’s worst humanitarian crisis, Mr. Guterres told those present that they had “the future of Yemen” in their hands.

Today, I hope we are seeing the beginning of the end of one of the biggest tragedies of the 21st century — the conflict in Yemen, the worst humanitarian crisis in the world. My remarks in Sweden https://t.co/33FJuWG7ls pic.twitter.com/gUFfam5b88

“You have reached an agreement on Hudaydah port and city, which will see a mutual re-deployment of forces from the port and the city, and the establishment of a Governorate-wide ceasefire,” he said, noting that the UN would play “a leading role” in the port.

“This will facilitate the humanitarian access and the flow of goods to the civilian population. It will improve the living conditions for millions of Yemenis,” he insisted.

Nearly four years after fighting escalated between the Government of Yemen and Houthi opposition movement, known officially as Ansar Allah, more than 24 million people – three-quarters of the population – need some form of assistance and protection.

Some 20 million are food insecure and 10 million of these people do not know how they will obtain their next meal.

While noting that “pending issues” have yet to be resolved, the UN chief said that representatives from the internationally-recognised Government of Yemen and the opposition had made “real progress” which had yielded “several important results”.

These included a “mutual understanding to ease the situation in Taizz”, Mr Guterres said, in reference to the country’s third largest city.

“We hope this will lead to the opening of humanitarian corridors and the facilitation of demining,” he added.

On the previously-agreed issue of a mass exchange of prisoners, the UN Secretary-General noted that both delegations had drawn up a timeline and provided further details on when it might happen.

This would allow “thousands - I repeat, thousands - of Yemenis to be reunited with their families,” Mr Guterres said, with UN Special Envoy for Yemen, Martin Griffiths, at his side.

Looking ahead to a new meeting between both parties in the new year, the UN chief insisted that another “very important step for the peace process” had been agreed, namely a willingness to discuss a framework for negotiations.

“You have agreed to meet again to continue to discuss this further at the end of January during the next round of negotiations,” Mr. Guterres said, adding that it was a “critical element” of a future political settlement to end the conflict.

“We have a better understanding of the positions of the parties,” he added, noting their “constructive engagement”, while also crediting the Governments of Saudi Arabia, Oman and Kuwait for their “concrete support” in making the meeting happen.

Welcoming the announcement on the Hudaydah ceasefire, the World Food Programme (WFP) underlined that the Red Sea port was “key” to importing some 70 per cent of Yemen’s humanitarian and 90 per cent of its commercial needs.

“Any progress towards peace is good progress, as long as it helps the Yemeni people who have suffered so much in this conflict,” said WFP Executive Director David Beasley, noting that what Yemen needed most was lasting peace.

“Today’s announcement gives us hope that the World Food Programme’s work to feed 12 million severely hungry Yemenis may be made easier in the coming weeks and months.”

Owing to the conflict, in recent weeks imports have decreased by about half at Hudaydah’s docks, WFP spokesperson Herve Verhoosel said.

“In November, our target in Hodeidah Governorate was to reach 800 000 people in need of food assistance. This ceasefire will of course help us in our daily activities as the region is one of WFPs priorities.” 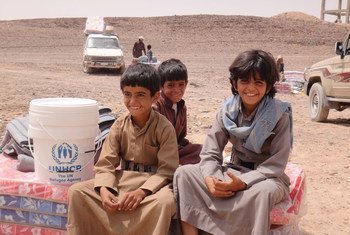 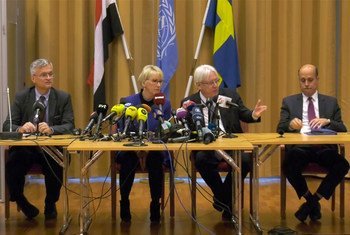