MINUJUSTH/Leonora Baumann
A scene from inside a women's prison, Haiti, October 2018.
12 December 2018
Peace and Security

Triggered by violent demonstrations and numerous allegations of government mismanagement of public funds, and “worrying episodes” of violence in some Port-au-Prince neighbourhoods, Special Representative Helen La Lime said that although progress has been slow, the UN Mission for Justice Support in Haiti (MINUJUSTH) has had a positive impact.

Noting progress on “reinforcing rule of law institutions, increasing the capacity of the Haitian National Police, and promoting human rights”, she pointed out that the government now has a dedicated ministerial level focal point for human rights, which “indicates Haiti’s readiness to engage with international human rights bodies and to prepare a national action plan.”

Ms. La Lime said it was encouraging that the national ombudsperson’s office is slowly increasing its influence outside of the capital, Port-au-Prince and that the space for human rights organizations is expanding in general.

Through a constructive and peaceful dialogue, the democratically-elected Government of Haiti could...implement programmes that improve the lives of its citizens -- Special Representative Helen La Lime

She pointed out that at the Prime Minister’s request, a joint commission had been established between MINUJUSTH, his advisers and other UN agencies, to remove bottlenecks in implementing the mission’s mandate and to provide a technical support forum.

However, much remains to be done, such as replicating successful pilot projects throughout the country, including one that tackles pre-trial detention in the jurisdiction of Port-au-Prince; and addressing in a systemic manner gang violence which has become endemic to several Port-au-Prince neighborhoods.

“It would behoove not only the government of Haiti, but also the international community to fulfill their commitment to fully fund the five-year HNP [Haitian National Police] Strategic Development Plan, so as to ensure the continued buildup of human, logistical and material capacity of the institution,” she continued, assuring the Council that “MINUJUSTH will focus on fulfilling these objectives.”

She informed the chamber that following a request by the Haitian authorities, a needs assessment mission was recently deployed to Port-au-Prince to determine the UN’s level of technical assistance and logistical support to the country’s upcoming parliamentary and municipal elections.

Ms. La Lime asserted that while all MINUJUSTH benchmarks would not be achieved by 15 October 2019, with responsible planning, the reconfiguration of the UN presence in Haiti to a non-peacekeeping one is “still feasible,” reporting that “this month MINUJUSTH will be reducing the footprint of its Formed Police Units from seven to five.”

Stressing that the mission’s success depends on the Government functioning properly, she noted that over the last weeks she has contacted the President, Prime Minister, political leaders and key private sector players to advocate for a de-escalation of current tensions and respect for constitutional order.

Citing the Government’s efficient response to the 6 October earthquake as demonstrating the capacity of a united Haitian State, Ms. La Lime asserted that it was important to collectively assist the country in emerging from the current political impasse.

“Through a constructive and peaceful dialogue, the democratically-elected Government of Haiti could set the stage for the next cycle of elections, and continue to implement programmes that improve the lives of its citizens,” she concluded.

♦ Receive daily updates directly in your inbox - Subscribe here to a topic.
♦ Download the UN News app for your iOS or Android devices.
Haiti|MINUJUSTH|security council 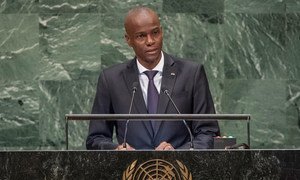 Haitian President Jovenel Moïse on Thursday called on the international community to provide the necessary development aid as the Caribbean island nation prepares for the transition nest year of the United Nations mission to a non-peacekeeping presence in the country. 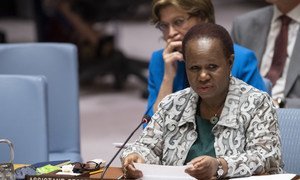 Haitian authorities must do more to prepare the Caribbean island nation for the planned withdrawal of the country’s UN peacekeeping mission, Bintou Keita, Assistant Secretary-General for Peacekeeping Operations, told the Security Council on Thursday.