While there is “staunch support” among Member States for the 2016 Iran nuclear deal, known formally as the Joint Comprehensive Plan of Action, or JCPOA, that is tempered by concerns over some of its other activities, which Iran “should carefully consider and address” according to the latest report  on the deal from the UN Secretary-General.

That was one of the key messages delivered to the United Nations Security Council on Wednesday by Rosemary di Carlo, Under-Secretary-General for Political Affairs, who stressed that UN chief António  Guterres continues to view the JCPOA as a “demonstration of successful multilateralism, and a major achievement of nuclear non-proliferation, dialogue and diplomacy.”

Ms. Di Carlo reminded the Council that, last month, the International Atomic Energy Agency (IAEA) reported to the Council that Iran continues to abide by its commitments with regard to ballistic missile tests reportedly carried out by Iran since January 2018 – as well as the launch of several ballistic missiles launched at targets in Syria on 1 October.

She said that the UN has not been able to determine whether the missiles were transferred from Iran after 16 January 2016, the Implementation Day of the Security Council Resolution endorsing the nuclear plan. The UN is also analysing information on military equipment recovered in Yemen where conflict is on-going between Government and rebel forces for control of the country, which had “characteristics of Iranian manufacture.”

The UN Secretary-General, she added, welcomes the ongoing commitment of the signatories to the deal with Iran, namely China, France, Germany, Russia and the United Kingdom, although the US announced its withdrawal in May and recently reimposed full sanctions.

Speaking on behalf of the United States, Mike Pompeo, US Secretary of State, claimed that the “Iranian regime’s ballistic missile activity has grown since the nuclear deal”, adding that “Iran has exploited the goodwill of nations and defied multiple Security Council resolutions in its quest for a robust ballistic missile force.” Mr Pompeo called on the Council to “thwart Iran’s continuing efforts to circumvent the existing arms restrictions,” adding that the nuclear deal has “shielded the Islamic Republic of Iran from accountability to the risks it presents to the world.”

In response, Mr. Eshagh al Habib, the acting Chargé d-affaires of Iran, described the US withdrawal from the plan, and the subsequent re-imposition of sanctions, as “unlawful conduct” and a “clear violation” of the resolution endorsing the plan. He said that the Council should “strongly condemn the U.S for re-imposing its illegal sanctions against Iranians in violation of the UN Charter and international law.”

♦ Receive daily updates directly in your inbox - Subscribe here to a topic.
♦ Download the UN News app for your iOS or Android devices.
iran|security council 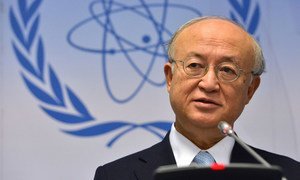