The continued use of the death penalty in Belarus has been condemned by an authoritative UN rights body after three men were reportedly executed there, despite its requests for clemency.

The Human Rights Committee, one of 10 UN treaty bodies that meet regularly in Geneva, had appealed to Belarus not to carry out sentencing on Aleksei Mikhalenya, Semyon Berezhnoi and Igor Gershankov, while it examined their cases.

#Belarus: It's unconscionable to carry out capital punishment in defiance of Human Rights Committee’s request for a stay — UN experts. The #HRCttee’s requests to halt executions, while individual complaints are still pending, are binding under int'l law 👉 https://t.co/EKczJ4xhQO pic.twitter.com/qEWzLzeUDB

“The fact that such failures occur in the context of capital cases which implicate the right to life, and which the Committee considers to be the ’supreme right’, is particularly unconscionable.”

The prisoners were executed in May and November this year, according to the committee.

All three had been found guilty of murder, although “all three cases contain allegations of torture in detention and forced confessions”.

In line with standard practice, relatives of the dead were “ignorant of the time and circumstances” of their death, the committee said, while their bodies were also not returned to their families – “an additional, useless pain”.

Belarus remains the last country in Europe and Central Asia that applies the death penalty, according to the Human Rights Committee.

In its latest report on Belarus published in November 2018, the UN panel emphasized that Belarus “should consider establishing a moratorium on executions as an initial step towards legal abolition of the death penalty”.

The country should also commit to abolishing the death penalty by ratifying the Second Optional Protocol to the International Covenant on Civil and Political Rights, it urged, “commute all pending death sentences to imprisonment and increase efforts to change public perception about the necessity of maintaining the death penalty”. 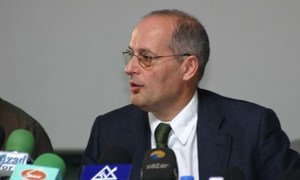 A crackdown on free speech is the latest worrying development amid the deteriorating, “wholescale oppression” of human rights in Belarus, an independent expert told the UN General Assembly, on Thursday.