From #MeToo to #HearMeToo, the fight to end violence against women continues as UN Women Goodwill Ambassador, Nicole Kidman, joined survivors, activists and other Hollywood celebrities to spotlight the lack of resources that exist to help women push back against violence and abuse.

On Monday, Human Rights Day, the UN Women-managed global grant-making mechanism to eradicate all forms of violence against women and girls, the UN Trust Fund to End Violence against Women, held a fundraising luncheon in Santa Monica, California, one of the hubs of the #MeToo movement that rose up last year against sexual harassment and abuse, by powerful men in the entertainment industry.

Hosted by Ms. Kidman and UN Women’s Executive Director Phumzile Mlambo-Ngcuka, the event amplified the voices of women and girls around the world who have survived violence or who strive to defend women’s rights, often without garnering media headlines.

“When I became UN Women’s Goodwill Ambassador some time ago”, the Australian-born Academy Award-winning star said, “I met with women and girls who had survived violence and who were supported by the UN Trust Fund.”

“I saw first-hand the real difference it makes in the lives of women and girls,” she continued. “I’m here today to continue this work and amplify the voices of women survivors through the media and help raise significant funds for programs that address this issue.”

Over the past 22 years, the UN Trust Fund has supported 460 organizations, and backed over six million people last year alone.

Actor and activist Gabriella Wright, cited the example of one powerful UN Trust Fund initiative which had supported a young woman survivor of violence from Zimbabwe, who is deaf. Unlike others in her situation, she managed to access justice by taking her attacker to court. He is now in jail.

“We are witnessing the power of a global sisterhood to end the normalization of violence against women and girls that is telling perpetrators ‘time is up”, said Ms. Mlambo-Ngcuka.

Yet, much needs to be done to end the violence and abuse that impacts one-in-three women worldwide.

“We must continue to amplify the voices of all survivors and activists, especially those who are typically marginalized or whose voices have been muted, and come together in global solidarity for change”, she continued, highlighting the need for worldwide mobilization.

Through public events around the planet, including concerts in Chile, Colombia and Bangladesh; murals in Afghanistan and in public transportation hubs in El Salvador, Vanuatu, and The Philippines; global citizens have stood in solidarity with survivors and advocates.

Since 25 November, the International Day for the Elimination of Violence against Women, which launched 16 Days of Activism, has raised awareness and galvanized action against gender-based violence under the banner, “Orange the World: #HearMeToo.” 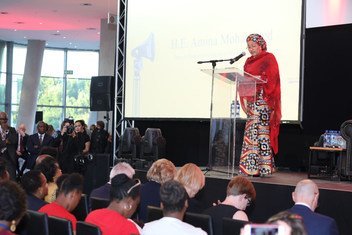 During her current trip to South Africa, Deputy-Secretary-General Amina Mohammed has spoken at several events in Johannesburg, on the importance of the 2030 Agenda for sustainable development - the UN’s blueprint to end extreme poverty, fight injustice, and protect the planet, ensuring that no one is left behind.