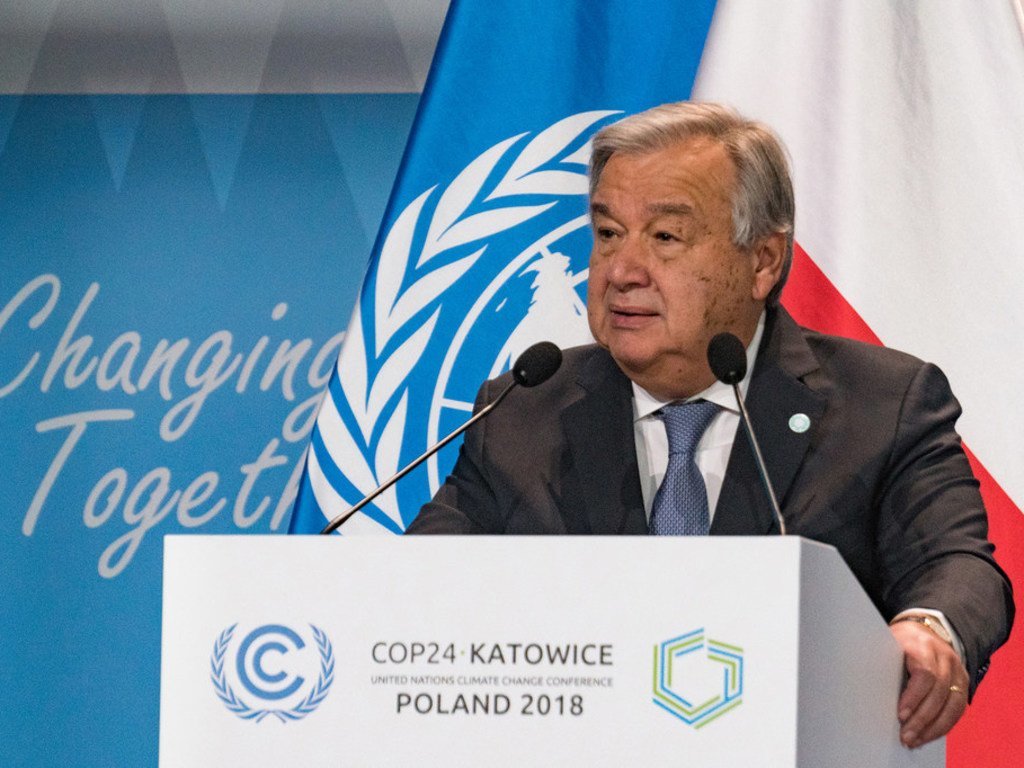 The two-week 24th conference in Katowice, Poland, of the parties to the UN Climate Change Convention (UNFCCC), technically started on Sunday, but Monday saw the high-level grand opening. It marks the deadline for the 197 parties that signed the Convention, to adopt guidelines for the implementation of the historic 2015 Paris Agreement.

In the French capital, three years ago, countries collectively agreed to keep global temperature rises to no more than 2°C above pre-industrial levels, and if possible, to limit the rise to 1.5°C. Now, in Poland, they have to agree on how they will achieve this collectively. “We cannot fail in Katowice,” said UN chief Guterres.

Kicking off the event, along with several other high-level representatives, he highlighted four key messages for the thousands of representatives of the world’s nations, non-profit organisations, UN agencies, and private sector companies gathered in Katowice.

The Secretary-General started by noting that climate change is already “a matter of life and death” for many people, nations and countries of the world, and that the science is telling us we need to move faster.

Citing various alarming UN reports – including one on rising global CO2 emissions and another one on increasing greenhouse gas concentrations in the atmosphere – he called on nations to pay attention to the science and step up their pace as well as their ambitions.

It is inspiring to meet so many young people at #COP24. The world needs ambitious and urgent #ClimateAction – they are stepping up to the challenge! pic.twitter.com/DFq3PcwN89

“Even as we witness devastating climate impacts causing havoc across the world, we are still not doing enough, nor moving fast enough, to prevent irreversible and catastrophic climate disruption,” he stated.

“Last year I visited Barbuda and Dominica, which were devastated by hurricanes.  The destruction and suffering I saw was heart-breaking,” he explained, noting that “these emergencies are preventable”.

He called on the international community to work to ensure that emissions must decline by 45 per cent from 2010 levels by 2030 and be net zero by 2050, and that renewable energy will need to supply half to two-thirds of the world’s primary energy by 2050 with a corresponding reduction in fossil fuels.

“If we fail, the Arctic and Antarctic will continue to melt, corals will bleach and then die, the oceans will rise, more people will die from air pollution, water scarcity will plague a significant proportion of humanity, and the cost of disasters will skyrocket”, he warned the delegates ahead of their negotiations:.

2. Implementation guidelines are essential to build trust among nations

Stating that “we have no time for limitless negotiations”, the Secretary-General insisted on the need to operationalise the Paris Agreement, and reminded Member States that 2018 is the deadline that they set for themselves to finalise the guidelines for implementation.

“We need a unifying implementation vision that sets out clear rules, inspires action and promotes raised ambition, based on the principle of equity and common but differentiated responsibilities and respective capabilities, in light of different national circumstances”, said the UN chief.

“We achieved success in Paris because negotiators were working towards a common goal,” he added as he implored the delegated to maintain the same spirit of urgent collaboration to “ensure that the bonds of trust established in Paris will endure.”

3. Adequate funding of climate action will be 'central'

“We need concerted resource mobilization and investment to successfully combat climate change,” the Secretary-General told the delegates attending the COP24 grand opening, noting that three quarters of the infrastructure needed by 2050 for climate action still remains to be built.

He insisted on the need to focus efforts on five key economic areas: energy, cities, land use, water and industry.

“Governments and investors need to bet on the green economy, not the grey,” he explained, stressing the need to embrace carbon pricing (i.e. charging emitters of CO2 for their emissions), eliminate harmful fossil fuel subsidies, and invest in clean technologies.

“It also means providing a fair transition for those workers in traditional sectors that face disruption, including through retraining and social safety nets,” he noted, adding that “we also have a collective responsibility to assist the most vulnerable communities and countries – such as small island nations and the least developed countries – by supporting adaptation and resilience.”

In 2015, a total of 18 high-income nations committed to providing US$100 billion dollars a year, by 2020, to lower-income nations to support their climate action. Mr. Guterres urged developed nations to deliver on this commitment.

He also urged Member States “to swiftly implement the replenishment of the Green Climate Fund. It is an investment in a safer, less costly future”.

“All too often, climate action is seen as a burden,” said the UN secretary-General, as he explained that “decisive climate action today is our chance to right our ship and set a course for a better future for all”.

The UN chief commended cities, regions, civil society and the business community around the world for moving ahead. “What we need is political more will and more far-sighted leadership. This is the challenge on which this generation’s leaders will be judged.

According to the recent New Climate Economy report, “ambitious climate action could yield 65 million jobs and a direct economic gain of $26 trillion US dollars compared to business as usual over the next 12 years”.

The UN chief stressed the need to ensure that this economic transformation is led with a commitment to gender equality, and the inclusion of youth.

“We must start today building the tomorrow we want,” the Secretary-General said.

The President of the UN General Assembly, Maria Fernanda Espinosa, called for “audacity” in climate action and noted that multilateralism is the only way to reverse the negative effects of global warming.

As for the President of this COP, Michał Kurtyka, referring to the mining past of Katowice, he invited the delegates to “pursue a path of deep but just transition” when bringing the Paris agreement to life. Earlier, the President of Poland, Andrzej Duda, presented a “Declaration for a Just Transition,”

The event closed with an address by the world’s people delivered by world renowned naturalist Sir David Attenborough. The statement was inspired by thousands of messages posted by individuals on social media over the past weeks, urging world leaders for climate action.

“Their message is clear: time is running out. They want you, the decision makers to act now. They’re behind you, along with the civil society represented here today,” he said.