During press briefings at the beginning of the G20 meeting of industrialized nations in Buenos Aires, UN Secretary António Guterres described the event as an essential forum, citing a lack of confidence and high level of confrontation within the international community.

As well as mistrust between nations, and the risk of confrontation and escalation, Mr, Guterres said that there was a lack of trust between peoples in general and institutions everywhere, both at a national level – in the form of governments and parliaments – and internationally; because globalization has divided the world into winners and losers.

Those left out, he said, “feel angry, that feel frustrated, that many times…there was not enough effort from their government, or from international organizations like the UN, in order to attend their problems, to attend their difficulties in the rustbelts of this world. I think it is very important to come together, the different countries around the world, and to have a common strategy for a fair globalization, which means a globalization that leaves no one behind.”

For this reason, the world’s largest economies, such as the G20 group, must support the UN’s 2030 Agenda for sustainable development, said the UN chief, which was developed precisely to ensure a fair globalization and aims to eradicate poverty and address a wide range of governance problems worldwide.

Mr. Guterres also pointed out that this year’s G20 meeting is important because it precedes the COP24 climate change conference taking place in Katowice, Poland from 3 December, at which the “Work Programme” or rule book of the 2015 Paris Agreement – when practically all countries signed up to a pledge to ensure global temperatures do not rise by more than 2 degrees before the end of this century– is expected to be agreed.

Addressing the media on Friday, the Secretary-General said that “Katowice must succeed. We need to build in Katowice the momentum that is necessary for an increased ambition to be shown by the international community…when in 2020 the commitments made in Paris will be renewed in order to make sure that we are able to bring the increase of temperature in the world until the end of the century to clearly below 2 degrees and as close as possible to 1.5 degrees.”

“Political will is lacking,” said the UN chief. “That is why it’s so important to come here and to express to political leaders how important it is for everybody to understand that this is a make it or break it moment in relation to guaranteeing that the Paris Agreement is implemented."

♦ Receive daily updates directly in your inbox - Subscribe here to a topic.
♦ Download the UN News app for your iOS or Android devices.
G20|COP24 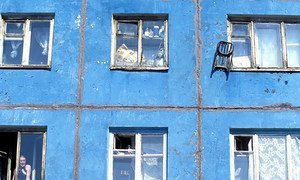 10 years on, governments are experiencing collective amnesia towards of one of the biggest factors behind the 2008 global financial crash –the housing crisis – which has not been addressed and is only getting worse, said Leilani Farha, UN Special Rapporteur on adequate housing, in a statement on Thursday. 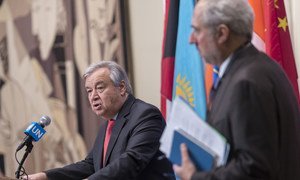