© UNICEF/UN056256/Ebo
In this file photo, a convoy of UN humanitarian vehicles moves through the war-ravaged city of Homs. While aid access has improved in parts of Syria, millions of civilians remain dependent on cross-border deliveries of food and other aid.
29 November 2018
Humanitarian Aid

Reported shelling – with mortars allegedly containing chlorine gas – against densely populated neighbourhoods in Aleppo was particularly worrying, Reena Ghelani, the Director of Operations and Advocacy at the UN Office for the Coordination of Humanitarian Affairs (OCHA), told the Security Council.

“Any confirmed use of chemical weapons is abhorrent and a clear and egregious violation of international law,” she stressed.

People with respiratory symptoms were rushed to the two main medical centres in the area, she continued, noting that the World Health Organization (WHO) “stands ready to provide further public health support as required.”

In addition, airstrikes were also reported in the Idlib Governorate on 24 and 25 November, Ms. Ghelani told Council members, which were the first such incidents in more than two months, since the demilitarization agreement between Russia and Turkey in September.

“The stakes remain high as the alternative is humanitarian suffering on a scale that would devastate a population of some three million people in northwestern Syria who have known nothing but war and suffering in recent years,” she warned.

UN Photo/Eskinder Debebe
Reena Ghelani, Director of Operations and Advocacy at OCHA, briefs a Security Council meeting on the humanitarian situation in Syria.

UN relief workers ‘shocked’ by what they saw in Rukban

Turning to humanitarian efforts, Ms. Ghelani, reported back on the joint UN-Syrian Arab Red Crescent (SARC) convoy to Rukban, earlier this month. It was the first relief since January, which brought food and other essential supplies to nearly 50,000 displaced persons and allowed over 5,000 children to be vaccinated against deadly diseases.

The situation there, however, continues to remain troubling, she said, describing how “colleagues returned shocked from what they saw on the ground, reporting grave protection issues, increasing food insecurity and no certified medical doctors among the stranded population.”

Given the urgent need and approaching winter, the UN Secretary-General has called for another convoy to be urgently deployed, she added.

Elsewhere in Syria, fighting continues to displace populations and millions remain dependent on assistance for their survival, with little semblance of safety and security.

The worst affected are Syrian children. Over 50,000 in the north-east of the country are facing challenges accessing schools and education, and an estimated 10,000 having not been able to attend classes since September.

“Vehicles, including school buses and private cars, have been prevented from crossing check-points if they are carrying children going to schools teaching the nationally accredited curriculum,” said Ms. Ghelani.

‘Millions of people depend on your decision’

In her briefing, Ms. Ghelani also called on the Security Council to extend, for a further year, its resolution authorizing cross-border humanitarian convoys which provide more than 4.3 million Syrians in non-Government controlled areas – a third of those in need across the country – with food and non-food relief items.

She explained that the cross-border assistance has a strict monitoring regime, checked and verified by the UN Monitoring Mechanism at designated border crossing points, confirmation of deliveries upon arrival as well as post-distribution monitoring by independent third parties and feedback from affected communities.

“Every truck is checked to ensure it only contains humanitarian supplies,” stressed the UN official, adding that there were no “alternative means of reaching these people as access from within the country is impeded … The renewal of the resolution will continue to save lives. Millions of people depend on your decision.” 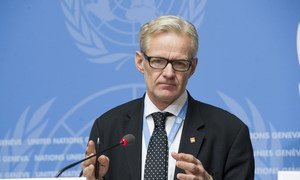