CLIMATE CHANGE FOCUS: Cutting emissions, one bog at a time

Farmers and entrepreneurs in rural eastern Europe are helping to tackle climate change while boosting their livelihoods as a result of regenerating ancient wetland peat bogs.

Peat is made up of decaying organic matter and, crucially, is able to absorb harmful carbon deposits which would otherwise add to carbon dioxide emissions, if released into the atmosphere. 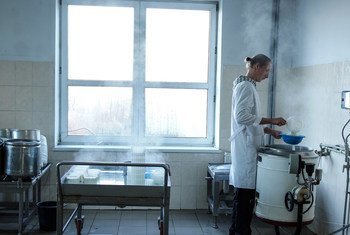 Many of the bogs in Belarus, Ukraine and Russia, have been drained so the land can be used for commercial development, but when dry, the peat becomes highly combustible. If it catches fire, then dangerous levels of greenhouse gasses are released.

Now, local people with the support of the UN Development Programme (UNDP) and European Union, are restoring the peatlands and setting up small businesses which can operate sustainably alongside.

It’s estimated that the 30 million tons of carbon has been kept in ground thanks to their efforts, the equivalent, UNDP says, of closing 140 coal-fired energy plants.

Read more here about how the conservation of peatlands is contributing to fighting climate change, and go here to our new UN.org climate change website, for the latest information across the UN, including the crucial upcoming COP 24 climate conference, in Katowice, Poland.