UN Photo/Eskinder Debebe
Michel Kafando, Special Envoy of the Secretary-General for Burundi, briefs the Security Council meeting on the situation in Burundi.

The absence of an inclusive political dialogue in Burundi has left country fragile amid the humanitarian, economic and financial difficulties and ongoing security threats, the United Nations Special Envoy there told the Security Council on Wednesday.

There is a “lack of trust and dialogue between the Government and the opposition parties, which is essential for the resolution of the ongoing crisis,” said Michel Kafando.

He noted that the security situation in Burundi has remained relatively calm in recent months, but that the human rights situation remains worrying.

“The Government has still not resumed cooperation with the Office of the United Nations High Commissioner for Human Rights. Violations of human rights and other abuses, such as arbitrary arrests, enforced disappearances, and other acts of intimidation, persist, as do hate speech, especially against opposition actors. The democratic space, except for some parties allied to the government, remains restricted,” said the Special Envoy.

The humanitarian situation remains worrying, he said. An estimated 1.7 million people are at risk of food insecurity.

In this context, the Special Envoy said he believed that “after more than three years of unremitting efforts, through the inter-Burundian dialogue process, it is necessary for the United Nations, the African Union, the subregion and Burundi's partners to reassess ways and means to help Burundi emerge from the current political crisis”.

According to Mr. Kafando, this should however be initiated first and foremost by the Burundians themselves and then by the region.

Noting that a regular summit of the East African Community would be held soon, Mr. Kafando said he wanted the Burundian question to be examined.

“Depending on the conclusions, and especially the recommendations that emanate from them, the East African Community, the United Nations, and the African Union will have to re-evaluate their commitments to help Burundi to finally get out of the conflict. crisis especially in view of the 2020 elections,” he explained.

The UN Department of Political Affairs (DPA) has been supporting regional efforts to help resolve Burundi’s political crisis since civil unrest erupted in April 2015 in Bujumbura in connection with the candidacy of President Pierre Nkurunziza.

The violence that followed an attempted coup d’etat in May 2015 saw hundreds killed, thousands internally displaced, and some 420,000 flee to neighboring countries.

Since then, Burundi has been trying to find a peaceful solution to the political crisis through the Inter-Burundian Dialogue, which is led by the region and supported by the United Nations, while the country is also preparing for the 2020 elections. 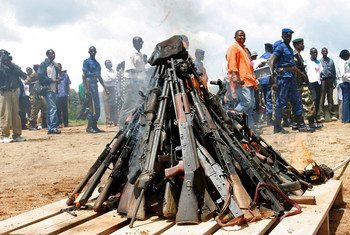