The United Nations migration agency said on Tuesday that it has upgraded structures in Bangladesh’s Rohingya refugee camps as temporary accommodations for emergency situations.

Under the first phase of the UN International Organization for Migration (IOM) project, which is supported by the European Union, 70 community buildings are available to temporarily shelter over 4,500 people.

“IOM and partners have provided over 100,000 households with materials to help them upgrade their own shelters,” said Manuel Pereira, IOM’s Emergency Coordinator in Cox’s Bazar.

“But,” he continued, “weather and environmental conditions in the camps mean tens of thousands of families live with the knowledge that their shelters could be damaged or destroyed at any time.”

The improved structures will allow IOM shelter and site management teams to better protect refugees affected by landslides, floods, bad weather or other unexpected events that would force them to leave their own shelters.

If the worst happens, we are still able to offer them a safe haven – IOM’s Manuel Pereira

“If weather conditions turn bad and storms destroy our shelters, people from our area will be able to stay here safely for a few days,” said community representative Mohammed Nur. “It is a relief for all of us,” he added.

The United Kingdom will fund a second phase to bolster another 100 buildings to accommodate another 10,000 people.

As the region is prone to some of the world’s worst monsoon conditions – undergoing two cyclone seasons each year – IOM explained that the dry season offers a window of opportunity to overhaul monsoon-damaged shelters, and the facilities will also be used as temporary lodgings for affected families.

“Ensuring we have secure and stable buildings in which people can safely take shelter if disaster strikes is hugely important under such circumstances,” maintained Mr. Pereira.

“This project means that even though people are living in very uncertain conditions, if the worst happens, we are still able to offer them a safe haven,” he added.

Almost a million Rohingya are currently living in Cox’s Bazar after escaping violence in Myanmar. In August 2017, some 500,000 people fled across the border in just a few weeks. Most Rohingya live in and around Cox’s Bazar, which has become the largest refugee settlement in the world – a desperately overcrowded environment prone to landslides and flooding. 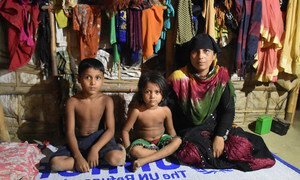