A spokesperson for the United Nations World Food Programme (WFP) has condemned any violence in the Democratic Republic of Congo (DRC) that could slow down the humanitarian response to the Ebola outbreak in the vast country’s north-east, following an attack on a UN base and nearby hotels housing UN staff, in the city of Beni on Friday.

Speaking at a press briefing in Geneva, Herve Verhoosel urged all parties in DRC to respect international humanitarian law, adding that WFP cannot afford any disruption to its life-saving operations: “any setbacks due to insecurity threaten to slow down efforts to limit the spread of the virus. Therefore, we urge all parties to facilitate the life-saving work of our teams and aid workers.”

No UN employees were injured in the attack and, although a number of WFP staff were temporarily relocated to the city of Goma, the majority remained in Beni, and the agency was able to continue the food assistance and logistical support it provides as part of the broader humanitarian response to the Ebola outbreak in eastern Democratic Republic of Congo (DRC).

The attack came just two days after seven UN peacekeepers were killed, and 10 wounded, during a joint operation with Government forces in Beni territory, against the Allied Democratic Forces (ADF) armed group in Beni territory, carried out as part of the UN mandate to protect the local population.

The World Food Programme is supporting the medical response to Ebola by transporting, delivering and storing medical supplies, constructing safe rooms for response teams, and getting food to those receiving medical care for Ebola in health facilities.

As population movements are a factor in the spread of disease, WFP is also providing food in the affected region, in order to limit these movements, and rations are provided to health workers and other front-line personnel.

♦ Receive daily updates directly in your inbox - Subscribe here to a topic.
♦ Download the UN News app for your iOS or Android devices.
DRC|WFP|monusco 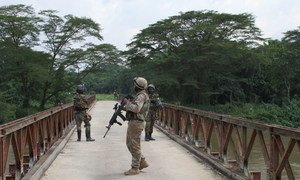 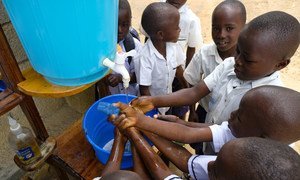 While new measures to tackle the Ebola outbreak in the Democratic Republic of the Congo (DRC) are working, the epidemic remains dangerous and unpredictable, the United Nations said on Thursday.