Until women and girls can live free of fear, violence and insecurity, the world cannot pride itself on being fair and equal, United Nations Secretary-General António Guterres said on Monday, commemorating the International Day for the Elimination of Violence Against Women, marked annually on 25 November.

“At its core, violence against women and girls in all its forms is the manifestation of a profound lack of respect­ ­– a failure by men to recognize the inherent equality and dignity of women,” Mr. Guterres said at a special event at UN Headquarters observing the Day, which highlights that violence against women is as serious cause of death and incapacity as cancer, among women of reproductive age.

The Day kicks off the 16 Days of Activism under the Secretary-Generals’ UNiTe campaign, which calls on people of all sectors to join in addressing the global pandemic of violence against women and girls.

This year’s theme is ‘Orange the World: #HearMeToo,’ and as in previous years, the color orange is used to draw global attention to the issue, while the hashtag is encouraged to amplify the message of survivors and activists and to put them at the centre of the conversation and response.

The theme also aims to broaden the global conversation and highlight the voices and activism of all survivors of violence and advocates around the world – many of whom are often missing from the media headlines and social media discussions.

“I want to be heard. I have rights.” -- activist & @UNTrustFundEVAW grantee Daniela Elizabeth Giuliano said powerfully #HearMeToo at the @UN commemoration of the International Day to End Violence against Women. #orangetheworld pic.twitter.com/u9RB1DgACl

“A culture that changes from questioning the credibility of the victims, to pursuing the accountability of the perpetrators within due process, is possible,” she said.

The UN Trust Fund to End Violence against Women is one of the ways the Organization is fortifying prevention and responses to the global scourge, by awarding grants to initiatives that support the rights of women and girls. Over the past two decades, the UN Trust Fund has supported more than 460 projects in 139 territories and reached over six million individuals last year alone.

In other efforts, UN Women, alongside the European Union and UN partners, are at the forefront of the ‘Spotlight Initiative;’ the largest ever single investment in eliminating violence against women toward the Sage Cities and Safe Public Spaces Global Initiative.

Still, hundreds of millions of women are victims to violence or sexual abuse.

Pointing to alarming statistics, Maria Fernanda Espinosa Garces, President of the UN General Assembly, reported that an estimated 35 per cent of women have experienced some form of physical and or sexual violence, and as many as 38 per cent of murders of women are committed by an intimate partner.

“It is a sad reflection on all communities, States, and the United Nations that the world is still far from reaching the goal of ending violence against women and girls,” she told Monday’s event.

“We are still far away.”

♦ Receive daily updates directly in your inbox - Subscribe here to a topic.
♦ Download the UN News app for your iOS or Android devices.
women|GENDER EQUALITY 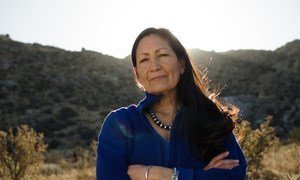 The record number of women who stood as candidates in the United States Congressional elections this week marks an “unprecedented” advance “critical for the achievement of gender equality and sustainable development,” the UN gender equality agency, UN Women, said in a statement on Thursday.