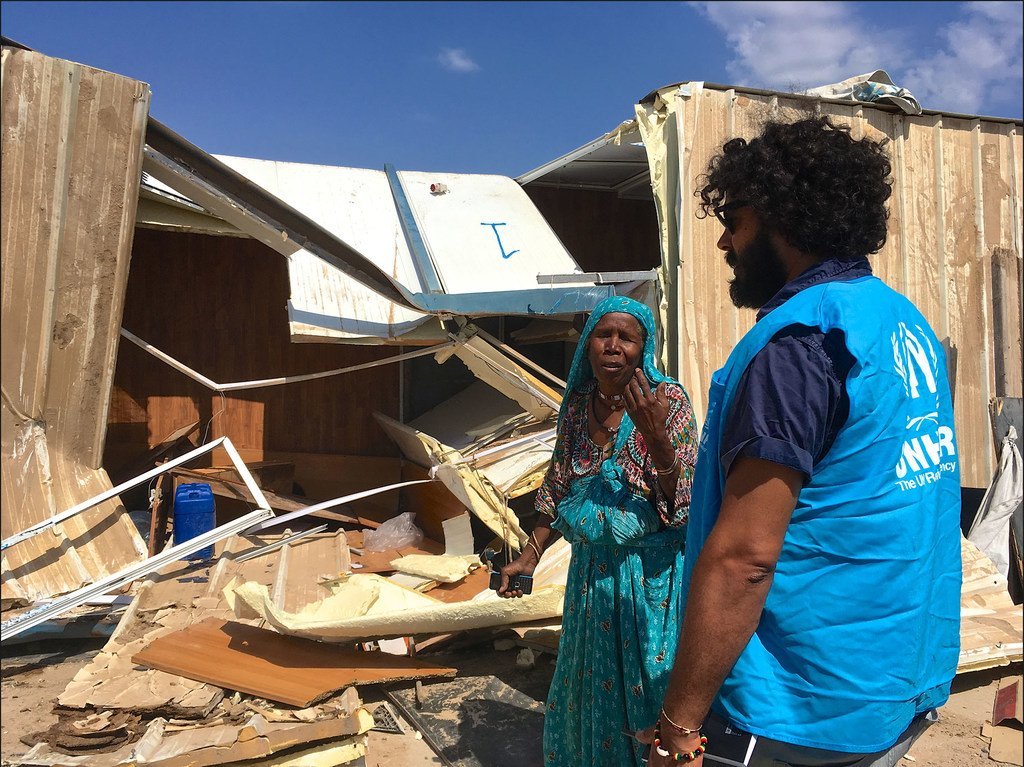 UNHCR/Tarik Argaz
A woman stands in front of her home, which was demolished by local militia during violence in Tripoli. Many people, forced to flee their homes, are returning after the ceasefire.
8 November 2018
Peace and Security

The recent ceasefire in Libya’s capital Tripoli, brokered by the United Nations mission in the country, is holding, its head told the Security Council on Thursday, highlighting efforts to sustain the calm and help secure lasting peace.

“We have dedicated ourselves to the consolidation of the ceasefire on the ground and at the political level to minimize the prospects of similar crisis in the future,” Ghassan Salamé, the Special Representative of the Secretary-General, said in a briefing to the 15-member Council.

Speaking from Tripoli, via teleconference, Mr. Salamé, said that a new comprehensive security plan for the capital is in place and that several armed groups have withdrawn from key Government buildings.

He stressed that the concept for executing the plan was “clear and balanced”, with armed groups outside the city remaining beyond the outskirts, while those within had reduced the level of intimidation on the streets and pulled back from attacking institutions in the centre.

“Looking forward, the city should be protected by disciplined, regular police forces”, said the Special Representative.

Armed groups have also “indicated readiness” to hand over the seaport and the airport’s civilian terminal to the authorities, he added, noting that there a “fragile but palpable” sense of improvement across Tripoli.

What works in Tripoli can be replicated elsewhere

The envoy said success in the capital was crucial not only given its large population, but also because “what works in Tripoli can be a model to be repeated elsewhere in Libya.”

At the same time, the drivers of the conflict in Libya, including the “appalling” conditions in detention centres and effective Government control over natural resources, must be addressed, stressed Mr. Salame.

“Some prisons have turned into incubators of extremist ideology,” he said, while hundreds of Libyans and foreigners remain illegally and inhumanely detained, as a way of securing ransoms.

Prisons which have become ‘for profit private enterprises’ run by armed groups under State-cover must be closed immediately – Mr. Salamé

A judicial process to improve prison conditions and release those wrongfully imprisoned must be expedited, and armed groups in control of prisons must return control to State authorities, stressed Mr. Salamé.

Alongside prison reform, there is also an urgent need to build capacity of security forces to enable them to protect and serve the Libyan population, he added.

Mr. Salamé also called for efforts to root out the abuse of the Libya’s vast natural resources by those illegally operating a “shadow economy.

“Libya is wealthy,” he said, but “Libyans have been increasingly impoverished, while criminals employ violence and patronage networks to steal billions from the national coffers,” he said, urging immediate steps to clamp down on the scourge.

UN Photo/Eskinder Debebe
Ghassan Salamé, the Special Representative of the Secretary-General for Libya, briefs the Security Council on the situation in the country.

The UN envoy also drew the Security Council’s attention to continued lack of action by the country’s legislature on any of the binding commitments it has previously made, including holding a referendum on the constitution, and fresh Presidential and parliamentary elections.

Although Libyans have made a clear demand for fresh elections, said Mr. Salamé, that call was being “resisted at all costs” by the legislature.

“Libyans are sick and tired of military adventurism and petty political manoeuvres,” he said, adding that the “time has come” to give a more representative group of Libyans the opportunity to devise a path out of the present impasse.

Ultimately, the country’s people should be the ones to “guide the way”, with the politicians following, stated Mr. Salamé.