Saudi Arabia expressed “regret and pain” for the killing of journalist Jamal Khashoggi, during a scheduled review session at the UN in Geneva on Monday, while asserting its commitment to achieving the “highest possible standards” in human rights in the country, including for women and migrants

Confirming that an investigation is still on-going into the death of Mr Khashoggi, who was last seen entering the Saudi consulate in Istanbul, Turkey, on 2 October, Dr. Bandar bin Mohammed Al-Aiban told Member States in Geneva that King Abdel-Aziz had personally initiated the probe.

“The Kingdom of Saudi Arabia has already expressed its regret and pain for the death of Jamil Khashoggi,” Dr. Al-Aiban said. “King Abdel-Aziz has already instructed the prosecution to proceed with the investigation into this case according to the applicable laws and preparation to reaching all facts and bringing all the perpetrators to justice in order to bear the facts to the public.”

Following Dr Al-Aiban’s comments, 40 Member States appealed to Saudi Arabia to find out what had happened to Mr Khashoggi, many also calling for reform to the Kingdom’s freedom of expression laws.

Around 10 countries also expressed concern about the ongoing conflict and humanitarian crisis in Yemen, where Saudi Arabia has faced criticism for coordinating air strikes which have killed civilians.

On the issue of Yemen, Dr. Al-Aiban insisted that Saudi Arabia “affirms its continuous support for the Yemeni people and their legitimate government”, which had requested assistance against Houthi attackers in 2015.

“The Coalition forces are doing their best to spare civilians, particularly women and children, civilian sites, and infrastructure as a side-effect of the armed conflict,” Dr Al-Aiban said, adding that Saudi communities near the border with Yemen continue to come under attack from the rebel Houthi movement’s militia.

Underscoring his country’s “intensifying” coordination with the international community to deliver aid to desperate people in Yemen – more than 14 million of whom face imminent famine, the UN has warned – Dr. Al-Aiban said that the Kingdom’s relief contribution amounted to more than $11 billion since 2015.

Amid concerns over freedom of expression in Saudi Arabia, the Saudi representative insisted that it was a “guaranteed right”, before noting the launch of “many multilingual television and radio channels” as evidence of people’s right to express their opinions.

The issue was picked up by many Member States, including Denmark, France, Germany and the United States, which although it is not a current member of the Human Rights Council, is permitted as a UN Member State to attend UPR discussions.

Specifically, it urged Saudi Arabia to more clearly define what constituted terrorism in law, so as not to criminalize expression, association or peaceful assembly.

Another non-Council member, the Russian Federation, meanwhile, echoed other countries’ comments that welcomed Saudi efforts to increase women’s participation in social and political life, before expressing concern about possible violations of religious minorities, prisoners and detainees, amid reports of alleged torture in detention centres - and of migrant workers, who make up one-third of Saudi’s population.

In addition to many calls for the abolition of the death penalty amid concerns that its use is increasing in Saudi Arabia, Member States present also urged the kingdom to banish the practice of male guardianship of adult women.

Reforms of the practice had only been put in place “partially”, Switzerland’s delegation said, and in most cases the discrimination against women “persists”.

“Recent news tells us of the oppressive atmosphere creating lethal consequences,” the Swiss delegation explained. “We call for freedom of expression to be reinforced, freedom of association and expression for all, ensuring security for all journalists and releasing from prison all those who have been imprisoned for freely expressing their opinions.”

A total of 97 countries spoke at the Universal Period Review of Saudi Arabia in Geneva. Read our UN News piece here, on how the UPR system works.

According to UPR rules, all 193 UN Member States are reviewed by their peers, at a rate of 42 a year.

The body meets three times a year and reports to the UN Human Rights Council.

States that have been reviewed also receive recommendations which they are expected to implement before their next review. 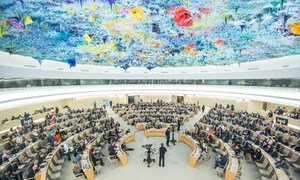 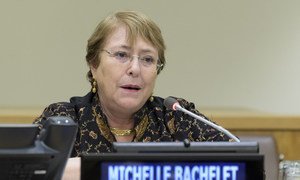