Some 30,000 children in Yemen die each year of malnutrition, Geert Cappelaere, UN Children’s Fund (UNICEF) Regional Director for the Middle East and North Africa told reporters on Sunday after visiting the country – calling it “a living hell for children.”

“A living hell not for 50-60 per cent of children. It is a living hell for every single boy and girl in Yemen,” he added at the press conference in Amman, which he dedicated to the memory of Amal, the emaciated girl whose New York Times cover photo shocked the world.

Mr. Cappelaere recounted that on Thursday he was able to see children in al-Thawra hospital – the only remaining referral hospital in Hodeida – because heavy fighting that night rendered it off-limits by Friday.

Half of Yemen’s under-age-five children are chronically malnourished, and more than a million pregnant or lactating women are anemic.

Every 10 minutes, a child is dying from diseases that can be easily prevented – UNICEF Regional Director

“When giving birth, these women know that their children will be of low birth weight, starting that cycle of malnutrition and leading to chronic malnutrition and all the health consequences for these boys and girls,” he lamented.

Moreover, vaccination levels have dipped dramatically since the war began, and outbreaks of measles and diphtheria are fatally impacting children.

He said: “in Yemen today, every 10 minutes, a child is dying from diseases that can be easily prevented.”

Mr. Cappelaere also elaborated on the dire economic, pointing out that fresh fruits, vegetables, meat, fish and even drinking water are too expensive for the most vulnerable families, he observed, “so you can easily understand why we have such high malnutrition.”

He concluded by stressing that while a permanent ceasefire “is incredibly needed,” ending the suffering of children will require a Yemeni governance that puts its people at the centre.

In parallel coverage, Angelina Jolie, Special Envoy for the UN Refugee Agency (UNHCR) called urgently for a ceasefire and a lasting settlement to the Yemen conflict, while advocating for vitally-needed support for refugees globally.

“As an international community we have been shamefully slow to act to end the crisis in Yemen,” she said on Sunday. “We have watched the situation deteriorate to the point that Yemen is now on the brink of man-made famine and facing the worst cholera epidemic in the world in decades.”

The UNHCR envoy is visiting some 500 Yemenis in South Korea who, fleeing the conflict, have been living in Jeju since May.

We have been shamefully slow...to end the crisis in Yemen – UNHCR envoy Angelina Jolie

“When conflict develops to this extent, many people have no choice but to flee if they are to have any chance of survival. The only way to enable refugees to return home, and to bring down the overall numbers worldwide, is to end conflicts themselves.”

Ms. Jolie called on the Security Council to find a negotiated end to the conflict and to uphold international laws on the protection of civilians while appealing for greater understanding of refugee protection laws, and for all countries to play their part in alleviating the human suffering in Yemen.

“I hope there can be greater understanding of the human realities causing people to flee, the strict legal criteria and process by which refugee status is determined by UNHCR, working with national authorities, and our shared responsibility to assist refugees until they can return home,” she continued.

“Without a global response based on international law and collective responsibility, we risk much greater instability and insecurity over the long term, which would have a negative impact on all countries,” concluded Ms. Jolie.

Push to resume the political process

In Amman, Jordan, Special Envoy for Yemen Martin Griffiths discussed the current situation with a group of independent Yemeni figures along with his endeavors to resume the political process. 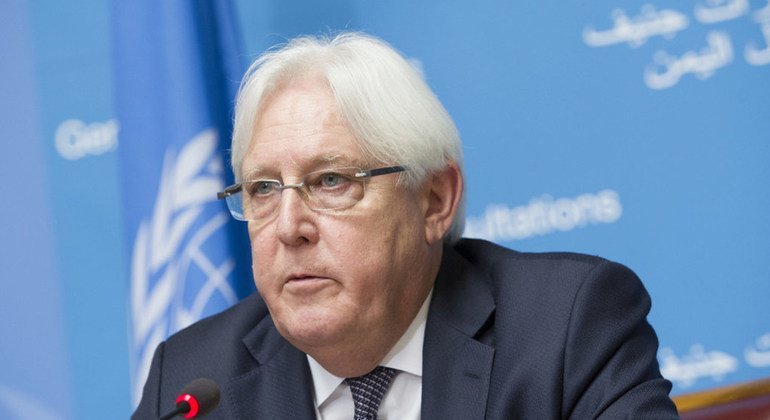 With nearly one-third of the participants women, the Special Envoy discussed his ongoing efforts to achieve progress on Confidence Building Measures, stressing his keenness to engage with various Yemeni figures, civil society and women groups, as representatives of the country’s citizens at large.

Discussions during this meeting covered a wide range of issues, including the deteriorating humanitarian and economic conditions, the lack of basic services and the steps needed to de-escalate the conflict.

♦ Receive daily updates directly in your inbox - Subscribe here to a topic.
♦ Download the UN News app for your iOS or Android devices.
Yemen|malnutrition