Bart Verweij/World Bank
Through a national school feeding program in Oudomxay province, Lao PDR, students get at least a third of their daily energy and nutrition needs. Seen here, a student enjoys her vegetables.
2 November 2018
SDGs

Well over half the world’s undernourished people live in the Asia-Pacific region, making it a critical part of the global push to end extreme hunger and malnutrition in line with the Sustainable Development Goal (SDGs), cautioned a new United Nations report on Friday.

The Regional Overview of Food Security and Nutrition, warns of “colossal human loss” to Asia and the Pacific, and its economies, if countries do not recommit themselves to ending malnutrition and achieving zero hunger by 2030.

Published by the Food and Agriculture Organization (FAO), the UN Children’s Fund (UNICEF), World Food Programme (WFP) and the World Health Organization (WHO), the report reveals that the decline in hungry and malnourished people has come to a virtual standstill in many parts of the region, with its population of nearly half a billion-undernourished people.

While recently released global figures indicate a rise in hunger worldwide, returning to decade-old levels, the report points out that in the Asia-Pacific, the effort has essentially stalled.

The sense of urgency cannot be overstated –UN agency heads

The report highlights a legion of converging challenges threatening SDG 2 to end all forms of malnutrition by 2030.

“The report’s estimates show that the number of hungry people has barely changed during the past two years, making it increasingly difficult to achieve the Zero Hunger target of, SDG 2,” the four UN agencies’ regional heads wrote in their joint foreword.

In addition to having half the world’s underfed children, around 79 million under-five suffer from stunting, while 34 million children suffer from “wasting”, a debilitating disease that causes muscle and fat tissue to waste away – drastically increasing the risk of death.

Although some progress has been made towards reducing stunting, wasting has seen little improvement over the past decade.

“The sad reality is that an unacceptably large number of children in the region continue to face the multiple burden of malnutrition despite decades of economic growth,” the regional UN heads said.

“This is a colossal human loss given the association between undernutrition and poor cognitive development, with severe lifelong consequences for the future of these children,” they continued.

This is the first time that the four UN agencies have jointly published such a report, underlining the urgency of the situation, representing a united front and a call to action on the part of governments to reach their SDG commitments.

The UN agency heads note that the world cannot meet the 2030 target of zero hunger, if Asia and the Pacific is not leading the way: “The sense of urgency cannot be overstated.”

♦ Receive daily updates directly in your inbox - Subscribe here to a topic.
♦ Download the UN News app for your iOS or Android devices.
Asia-Pacific region|malnutrition 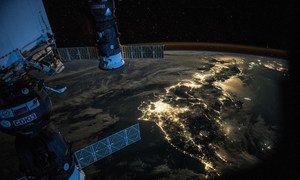