More than 200 people gathered at the historic synagogue on Manhattan’s Upper East Side, including local leaders of different faiths and denominations, who joined diplomats and others to call on all communities to stand “united against hate”.

The deadly mass-shooting by a lone gunman at the Tree of Life synagogue, in the US city of Pittsburgh, Pennsylvania, during Sabbath celebrations, left 11 people dead and six wounded.

“Since I became Secretary-General I have been raising my voice against what I believe is the rise of anti-Semitism in many of our societies, and mainly in my part of the world in Europe, but also importantly in North America” said Mr. Guterres, as he denounced Saturday’s “horrendous act.”

Citing other forms of anti-religious hatred being witnessed today – including against Muslims and Christians worldwide – he noted that anti-Semitism is the “oldest and more permanent form of hatred” to have endured “in the history of humankind”.

Calling for a “strong investment in the social cohesion of societies”, he stressed the responsibility of leaders of international organizations, political parties, religions and civil-society organizations, to “address the root causes that are undermining” this cohesion and “creating conditions for these forms of hatred to become more and more frequent, and more negative in the way they are expressed.”

The remembrance, titled “United against hate,” opened with a rendition of the song “Ose Shalom” – which means “make peace” in Hebrew – by the Park East Day School children’s choir.

The synagogue’s Senior Rabbi, Arthur Schneier, a Holocaust survivor whose family was killed in the Auschwitz Nazi death camp, stated in his opening remarks: “I have been through the worst. I have seen the best of Man and the worst of Man, and the best of Man will prevail.”

Sheikh Musa Drammeh, Chairman of the Islamic Cultural Center of North America said that “it is time for this nation to rise to the occasion and to make this union a more perfect union and to prohibit hate.”

The UN Secretary-General, who previously headed the UN refugee agency, UNHCR, noted he had worked closely with the Hebrew Immigrant Aid Society (HIAS) during that time, and had tremendous respect for its work. The Tree of Life Congregation’s support for HIAS, was one of the factor’s which drove the anti-Semitic gunman to target the synagogue.

“They are a true expression of humanitarianism, but also of humanism and solidarity,” he said, regretting that the alleged perpetrator of the attack chose to target an organization that “is the symbol of everything [he considers] good in the world”.

Other faith leaders in attendance, expressing their common rejection of all forms of violence, intolerance and anti-Semitism, included Cardinal Timothy Dolan, Archbishop of New York; Archbishop Demetrios, Primate of the Greek Orthodox Archdiocese of America; and Archbishop Auza, Permanent Observer of the Holy See to the United Nations.

Listen here to the remarks of UN chief António Guterres:

Listen here to the remarks delivered by Archbishop Auza, Permanent Observer of the Holy See to the United Nations, on behalf of Pope Francis:

Listen here to the remarks of Sheikh Musa Drammeh, Chairman of the Islamic Cultural Center of North America: 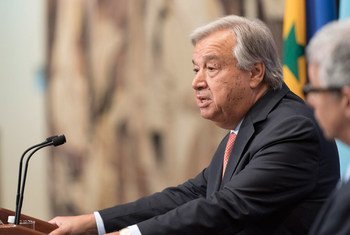 The UN Secretary-General said on Saturday he was “deeply shocked” by a deadly mass-shooting inside a synagogue in the US city of Pittsburgh, which reportedly left 11 people dead and several others wounded, some critically.