When it comes to helping green our world, organic mushrooms from the local market may be just the tip of the iceberg. A new United Nations-backed report reveals that fungi could help ween the world off its plastic addiction, by degrading polyurethane in just a matter of weeks.

According to the first-ever State of the World’s Fungi report, Scientists at London’s Kew Botanical Gardens reported that these organisms have the potential to break down waste plastic – an important advance in a world where momentum is building to reverse the toxic tide of plastic that is killing marine life and polluting the ocean.

Every year, at least eight million metric tonnes of plastic end up in the sea, sometimes decomposing into tiny microplastics that make their way into our food chain.

Senior Kew Gardens Scientist Ilia Leitch, said that other fungi and microorganisms are also being explored for their potential to degenerate different types of plastic, explaining that “by understanding how the fungi break down these bonds and what the optimal conditions are, you can then increase the speed at which they do it.”

In the meantime, the Kew Gardens report showcases the kind of pioneering thought that will be at the heart of the fourth UN Environment Assembly next March, on “innovative solutions for environmental challenges and sustainable consumption and production.”

Noting that there may be as many as 3.8 million fungal species, with only 144,000 named, the authors – a team of some 100 scientists from 18 countries – argue that further research into these organisms could provide answers to some of humanity’s greatest challenges.

The report spells out that advances in their agricultural applications could translate into improved food security, environmental sustainability and increased production revenues.

According to UN Environment (UNEP), there is mounting evidence that climate change is affecting the ranges of species and biodiversity in ways that are still not comprehendible. Fungi themselves are also under threat, particularly in high latitudes areas where average temperatures continue to rise, such as the Arctic. These changes are already affecting fungi reproduction, geographic distributions and activity, with possible knock-on effects for our ecosystems.

“Species react differently to climate change, which disrupts the delicate interaction between them,” says Niklas Hagelberg, a UNEP climate change and ecosystems expert.

“This further complicates conservation; we need to quickly add climate change to our ecosystem management effort.”

Ahead of next year’s assembly, UNEP is urging people to “think beyond and live within,” a motto that is aimed at tackling environmental challenges and assuring a prosperous future – that may include a role for fungi, that was unthinkable just a few years ago. 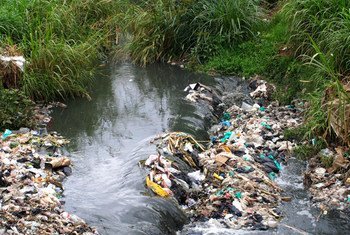 Marking World Habitat Day on Monday, UN-Habitat – the agency mandated with promoting sustainable cities – has called for greater imagination and innovation in tackling the world’s waste management challenges, in particular at the municipal level.