UN Women/Ryan Brown
Indigenous women in Guatemala were systematically raped and enslaved by the military in a small outpost near the Sepur Zarco community during the 36-year-long civil conflict. (April 2018)
25 October 2018
Women

With the help of local women’s rights organizations, including UN Women and other UN partners, the women from Sepur Zarco in the east of Guatemala succeeded in securing the conviction of two former military officers on charges of crimes against humanity, back in 2016. 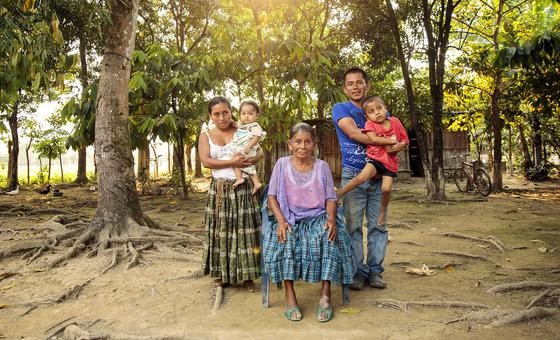 It was a groundbreaking legal decision; the first time anywhere in the world that a national court had prosecuted sexual slavery during conflict using national legislation and international criminal law.

The women were granted a total of 18 reparation measures, including education for the children of their community, access to land, a health-care clinic and other interventions which would help to confront what UN Women has described as “the abject poverty their community has endured across generations.”

Read more here, about the women known respectfully as the abuelas (grandmothers) of Sepur Zarco.

♦ Receive daily updates directly in your inbox - Subscribe here to a topic.
♦ Download the UN News app for your iOS or Android devices.
Guatemala|Indigenous Peoples|From the Field

FROM THE FIELD: Murals help heal wounds of bloody conflict in Guatemala