© UNHCR/Fauzan Ijazah
A UNHCR staff member comforts a survivor in Indonesia, who cries as she recounts her traumatic experience during the earthquake and liquefaction, in Palu, on the Indonesian island of Sulawesi. 21 October 2018.
24 October 2018
UN Affairs

Marking the 2018 United Nations Day, which falls on 24 October, Secretary-General António Guterres is urging the men and women of the UN, and those they serve, to “never give up” tackling the world’s many challenges.

In a video released in advance of UN Day, Mr. Guterres said that, despite the odds and obstacles, and growing inequality “we don’t give up because we know by reducing inequality we increase hope and opportunity and peace around the world.”

The UN chief made clear the Organization’s determination to implement climate action, fight for human rights and the life of peace that everyone deserves to enjoy: “On United Nations Day, let us reaffirm our commitment. To repair broken trust. To heal our planet. To leave no one behind. To uphold dignity for one and all, as united nations.”

UN day commemorates the anniversary of the entry into force of the UN Charter in 1945. With the ratification of this founding document by the majority of its signatories, including the five permanent members of the Security Council, the United Nations officially came into being.

Between October and November, visitors to UN Headquarters can see a photo exhibition called “People on the Move,” which is being displayed in the Visitor’s Lobby of the General Assembly building, in connection with 2018 UN Day.

The exhibition captures moments in time from the last seven decades of the millions of those who have, for one reason or another, become people on the move.

You can find out more about the UN charter, the history of the Organization and how to visit UN headquarters in Geneva here.

♦ Receive daily updates directly in your inbox - Subscribe here to a topic.
♦ Download the UN News app for your iOS or Android devices.
UN Day 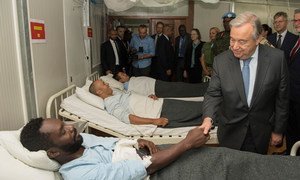 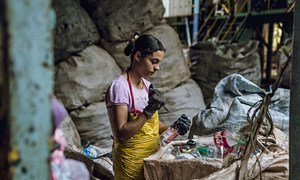 A Brazilian university student has won the top prize of the United Nations-backed photo contest that puts the Sustainable Development Goals (SDGs) in the spotlight.