© UNICEF/Aaref Watad
Around 400 families have taken shelter in a makeshift camp north of Idlib, Syria, after fleeing violence to the south of the city in early September 2018.

Russia and Turkey have said that they will allow “more time” for opposition groups to withdraw from a de-escalation zone in Syria’s Idlib, which has been spared air raids for more than a month, a senior humanitarian adviser to the UN said on Thursday.

Speaking to journalists in Geneva after a meeting of the International Syria Support Group's Humanitarian Access Task Force, Jan Egeland expressed “relief” that further violence in the north-west of the country had been averted, so far.

“The Russian and the Turkish side have indicated that indeed more time will be given to implement the agreement,” Mr Egeland said, in his capacity as Senior Advisor to the UN Special Envoy for Syria, Staffan de Mistura, who announced his resignation on Wednesday.

The big battles have ended in most of the country (but Idlib) could still become the worst battle yet – Jan Egeland, Humanitarian Adviser

"Some of the first deadlines have passed … there will be more time for diplomacy and that is a great relief to us,” he said, adding that “if one is to follow a military logic that has too often been followed in this war alone, it would be horrific news for civilians”.

After more than seven years of fighting that has left hundreds of thousands of Syrians dead, uprooted millions more and enmeshed the interests of several foreign powers, Mr. Egeland stressed the value of the current deal between Russia and Turkey, who are the guarantors of a proposed demilitarized zone in Idlib.

“We have now had five weeks without any air raids,” he said. “I can’t remember such a period for the last three years in Idlib. It’s a calm through this very sensitive, complex, difficult area full of three million civilians. It is a welcome calm.”

In addition to opposition groups, some three million people live in Idlib, along with 12,000 humanitarian workers.

Many people are there after fleeing other areas of Syria which have been reclaimed by Government forces; most recently the provinces of Dar’a and Quneitra in the south-east, as well as Eastern Ghouta, on the outskirts of Damascus.

“The big battles have ended in most of the country” but Idlib “could still become the worst battle yet”, Mr Egeland said.

He explained that even if the opposition groups including Al-Nusra withdrew their heavy weapons from the contact line, they would “of course” embed themselves in built-up areas of Idlib, leaving “a million civilians engulfed” in conflict.

“This is a fantastic deal so far because it prevents bloodshed, it has to continue like that,” he insisted.

While the eyes of the international community remain fixed on Idlib, there is still tremendous suffering in many areas of Syria, including in the east of the country, Mr Egeland stressed.

“There is horrific fighting that nobody seems to be caring about in the east, with 15,000 people in crossfire between Islamic state fighters and the attacking forces,” he said, stressing that although war is ending “in more and more provinces”, peace can only be built through human rights and the implementation of rule of law.

After coordinating the UN’s efforts to deliver humanitarian aid to Syria for more than three years, liaising with the Government of Syria and the international community over safe passage for aid convoys across front lines and borders, Mr Egeland also announced that it was time for him to step down.

Mirroring Staffan de Mistura, Special Envoy for Syria, who made a similar announcement on Wednesday at UN headquarters in New York, Mr Egeland said that he would be leaving his post at the end of November.

“It’s been very exhausting really…there hasn’t really been an evening or a weekend where we have not been dealing with an Aleppo, Homs, Dera’a, Eastern Ghouta, now Idlib, Rukban or some other issues,” he said. “So that’s the issue, and I presume I will be replaced by somebody better and that they will continue with a Task Force because the job is not even half done.” 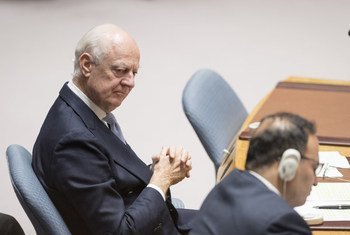 The United Nations Special Envoy for Syria, told the Security Council on Wednesday that he is stepping down at the end of next month, after four years and four months on the job 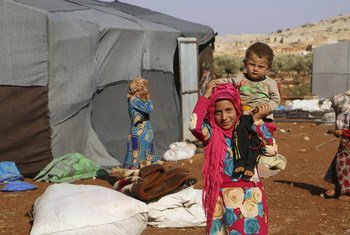 Highlighting the “complexities of the situation in Syria” with close to 13 million people in need of life-saving assistance, the United Nations Humanitarian Coordinator in the country called on warring parties to allow access to all areas from within the country, so aid can reach those in need “fast and efficiently”.