The struggle over natural resources often lies at the heart of violent conflicts, fuelling strife in many parts of the world, United Nations Secretary-General António Guterres said on Tuesday, urging governments and everyone with a stake in valuable resources, to think hard about how they are managed and exploited.

The risks associated with preventing and resolving such conflicts are “only going to grow” with the increasing impacts of climate change, warned Mr. Guterres, briefing the Security Council.

Citing the example of Africa – where 75 per cent of civil wars since 1990 have been partially funded by resources such as diamonds and valuable minerals – the UN chief highlighted the need for greater cooperation between civil society, governments and international organizations in regulating and controlling such assets.

With the increasing impacts of climate change evident in all regions, the risks are only going to grow - UN chief Guterres

“Through certified extraction, production and fair-trade practices, and with a focus on aiding local communities, lawlessness can be countered, and tangible benefits brought to conflict-affected populations,” he said, noting the positive impact of what is known as the Kimberley process certification scheme, on curbing trade in conflict diamonds.

In his briefing, the UN chief also emphasized that the wealth generated by shared natural resources, provides an incentive for cooperation and dialogue, such as in the Senegal River and Lake Chad basins in Africa; Lake Titicaca, in South America; or trans-boundary water management in Central Asia.

“And, from my own experience, the Albufeira Convention, agreed during my time as Prime Minister of Portugal, continues to promote good relations and cooperation on water management between Portugal and Spain,” he added.

Mr. Guterres also informed the 15-member Security Council of the Organization’s efforts to mitigate the fallout from competition, highlighting the UN’s work to address climate-related security risks, use of mediation over natural resources as a tool for conflict prevention, and partnerships at all levels.

“We are [also] seeking to strengthen the capacity of women’s networks and organizations to effectively engage in mediation processes around natural resources and the environment, including in the context of climate change,” he continued, noting support schemes for Afro-Colombian women in Colombia on natural resource use, ownership, governance and benefit-sharing.

In addition, a new UN system-wide guidance note to streamline the best approach to resolve conflicts over land use, has been recently finalized, said the Secretary-General.

The guidance note follows a study on land and conflict, published by the UN Human Settlements Programme, UN-Habitat.

♦ Receive daily updates directly in your inbox - Subscribe here to a topic.
♦ Download the UN News app for your iOS or Android devices.
natural resources|conflict 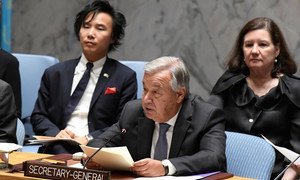 As conflicts become more complex, ‘mediation is no longer an option; it is a necessity’, UN chief tells Security Council

As war and the mediation of peace have become increasingly complex, innovative thinking is needed to save and improve the lives of millions, United Nations Secretary-General António Guterres told the Security Council on Wednesday.